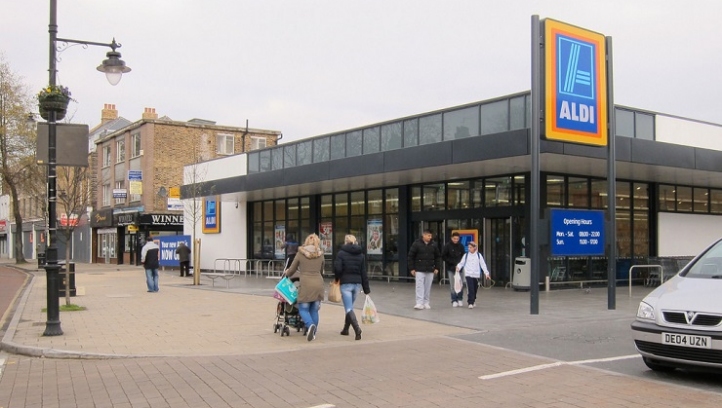 Aldi to Install 96,000 Solar Panels Across UK Stores This Year

German discount supermarket chain Aldi has today (5 July) announced it will install 96,000 solar panels across more than 50 UK stores by the end of 2017.

The panels will be added to the 85,000 units already installed across 275 stores and all nine of Aldi’s regional distribution centres, which generate more than 17,500MWh of electricity a year. The installations will take Aldi’s total store investment in solar to almost £17m, and will enable the retail giant to produce enough electricity to power the equivalent of more than 6,200 households.

Aldi UK communications director Mary Dunn said: “We are committed to reducing our carbon footprint and harnessing the power of solar energy is just one of the ways we’re doing that.

“Installing our 96,000th solar panel means we will be able to save around 8,100 tonnes of CO2 from being released into the atmosphere each year – that’s enough to fill the Royal Albert Hall more than 45 times over. It also means that we are using all of our distribution centres and more than a third of our stores across the UK to generate electricity from solar power.”

The announcement marks a significant step in Aldi’s ambition to reduce greenhouse gas (GHG) emissions by 30% by 2020. All new stores have more efficient LED lighting throughout the sales area, including in chillers and chest freezers. Using LED lighting saves each store around £5,000 per year in electricity and almost five tonnes of carbon.

Aldi’s energy consumption has been further reduced by heat recovery from fridges, chillers and freezers in a third of stores. This has allowed the retailer to sell excess energy generated back to the National Grid.

Meanwhile, the fastest growing British supermarket was one the first signatories of the Courtauld 2025 initiative, which has brought together organisations representing 93% of the UK food retail market to reduce the sector’s environmental impact.

“While sustainability is important to us, this isn’t just about reducing our impact on the environment,” Dunn said.

“Efficiency is at the core of our business model and green initiatives, such as generating our own electricity and reducing waste, help Aldi provide our customers with the lowest prices on great quality products.”

The retail sector has made significant in-roads into creating a greener industry in recent times. Sainsbury’s last month became the first supermarket in the UK to make a commitment to switch to 100% LED lighting by 2020. This came a week after IKEA launched a new smart device-based initiative which aims to cut in half the amount of food waste in its operations by 2020.

In 2015, the British Retail Consortium (BRC) claimed that the UK retail industry could save up to £4.1bn in cumulative energy and carbon costs by reducing its combined energy consumption 25% by 2050. And figures from the Consortium’s latest ‘A Better Climate Initiative’ report revealed that carbon emissions from UK retail stores had reduced by, on average, 35% from 2005-2016.