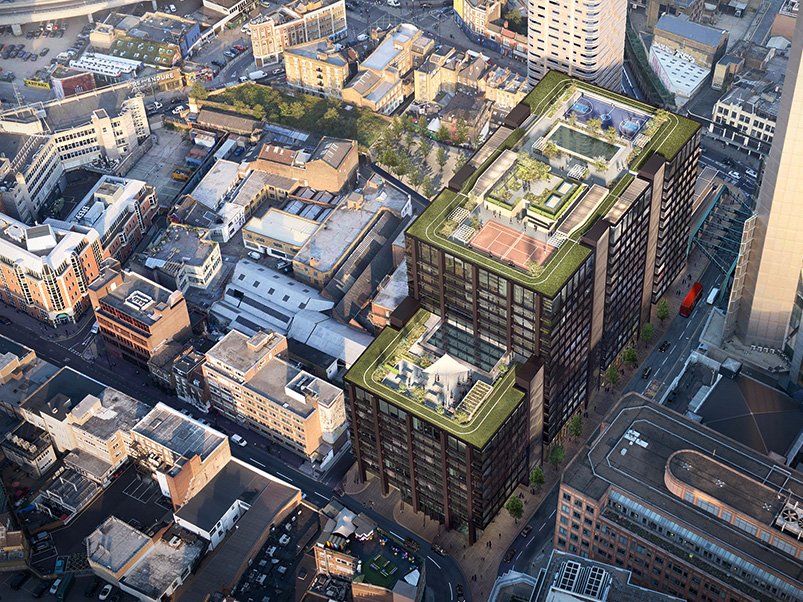 Amazon Has Started Moving Staff Into a Huge New London Office with Enough Space for Over 5,000 People

Amazon staff have started moving into a huge new London office, according to one of the company’s executives.

The Seattle-headquartered tech giant announced the new 15-storey office in September 2014, saying it was necessary to support its continued growth in the UK.

Bill Burkland, head of Amazon Business in the UK, told Business Insider on Wednesday that a number of staff have already moved into the new building, located on the border of trendy Shoreditch and the City of London.

The 600,000 sq ft building, known as Principal Place, can accommodate over 5,000 Amazon employees.

Previously released computer generated images for the office suggested that it would have a swimming pool, a basketball court, and a tennis court on the roof terrace. However, a source with knowledge of the development said none of these features came to fruition.

Amazon’s UK country manager Doug Gurr is hosting an office launch party on July 26 to mark the official opening of the new building, which has been built at an unknown cost. There were concerns that tech giants would cancel their new London offices as a result of Brexit.

Tech City UK CEO Gerard Grech told Business Insider in June 2016 that it was “hard to tell” whether companies like Google and Amazon would relocate their UK headquarters if the UK voted to leave the EU.

Meanwhile, Eileen Burbidge, partner at Passion Capital and chair of Tech City UK, said: “London is the biggest tech centre in Europe and attracts the brightest and best talent. Founders and investors fear that advantage would be lost if the UK leaves the EU. We don’t really know what would happen and that uncertainty is dangerous. Would companies move their headquarters?” Amazon’s main London office is likely to be taken over by Amazon Web Services.Business Insider/Sam Shead

But Amazon remains committed to the UK. It announced in May that it has invested £6.4 billion across the UK since 2010 and this year and that it intends to create 5,000 new permanent roles across the UK in 2017, bringing its full time workforce in the country to 24,000.

Amazon first started operating in the UK in 1998 from an office in Slough. The company has since expanded rapidly and today it has a number of offices across the country.

There is a large Amazon office near St Paul’s in London, as well as Amazon research and development (R&D) centres in Edinburgh and Cambridge. There’s also a network of vast Amazon warehouses across the country that contain products sold on Amazon’s website and a secret delivery drone test site just outside Cambridge.

Elsewhere, Google is also in the process of expanding its property empire in the UK, with a new Google “groundscraper” planned for a plot of land behind King’s Cross train station in London. Facebook and Snap have also opened new offices in the last year.