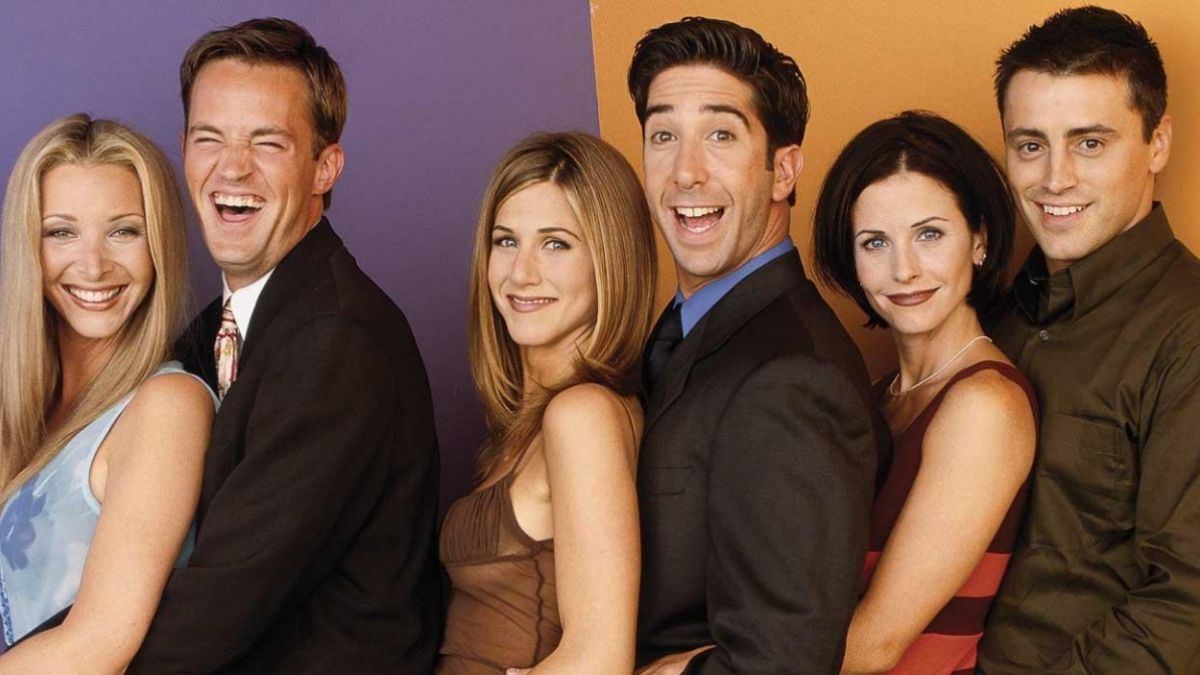 Last year, the 90s masterpiece Friends, which has been running and rerunning on TV for the last two and a half decades, caused joy and uproar when it made a return to the small screen via Netflix.

It was back! Hardly daring to believe this stroke of luck, many people of a certain age (these fearsome millennials we’ve been hearing about) took to their sofas to binge watch.

As one of these millennials, I was a happy cog in this machine of nostalgic fervour. However, alongside my uncritical enjoyment of this frankly problematic TV show, as I watched there was one aspect that stuck out, which I hadn’t paid much attention to before…

Phones and phone calls, and the sheer amount that these are used. Friends was filmed in the 90s, so there weren’t really mobile phones yet. They appear in later seasons, but they’re not a big feature. What struck me, though, wasn’t just the absence of mobiles and internet and so on, but rather the easy, natural, unstressed way they all use the phone. They ring each other constantly! They call strangers and service people! They’re always just picking up the phone and…ringing! Unannounced!

Fast forward to the present and things are quite different.

Firstly, our phone usage has decreased – we’re all calling each other far less. Three years ago, 96 percent of smartphone owners were making at least one voice call per week. Now, only three quarters of us do, while a quarter of us don’t make weekly phone calls at all.

Research commissioned back in 2012 by O2 found that the ‘telephone’ app is only the fifth most used app on the general public’s phones. Based on the rate of development of smartphones and communicative practices, chances are high that this has decreased again in the seven years since.

Secondly, phone calls make us nervous. A new, but increasingly prevalent problem for the modern age is so-called “telephone apprehension”. And it’s not only millennials who suffer from this (although they famously do). Around 10-15 percent of the population suffer from anxiety or fear when using the telephone; of these, around 2.5 percent are so anxious that they can be described as truly “telephonophobic”.

But where is this anxiety coming from? One argument is that for some, it’s about politeness. People born since the late 80s and 90s have grown up with numerous methods of communication, and as such, are never out of reach. Accordingly, they might be more likely to choose written rather than verbal communication, because it’s less intrusive – it doesn’t create an immediate demand on someone’s time.

For many, it’s not the case that phone calls are The Worst and to be avoided at all costs – but their intrusiveness needs to be managed. It’s become common courtesy to send a quick message before you pick up the phone, to check whether the person is free. This might seem odd, but it’s commonplace in the workplace – in many professions, people are far more likely to schedule non-urgent calls than to pick up the phone and demand immediate attention.

This is something to consider for companies like ContactEngine, which conduct multichannel customer conversations. It’s all very well sending SMS or email or other written comms, but voice calls are a different beast.

Because looking at the above in reverse, if people are making fewer calls, they’re not answering calls either. Another new (or not new anymore) aspect of phones is caller ID. We used not to know who was calling us when we answered the landline. Without caller ID, you just had to risk it. And we did!

But now? How many of us actually answer calls from an unknown number?

When designing our communications, we talk about the problem of customers not answering phone calls – but when I asked my colleagues if they answer calls from an unknown number, none of them said they do. I know I don’t. And we’re not alone, as some recent ContactEngine research indicates… 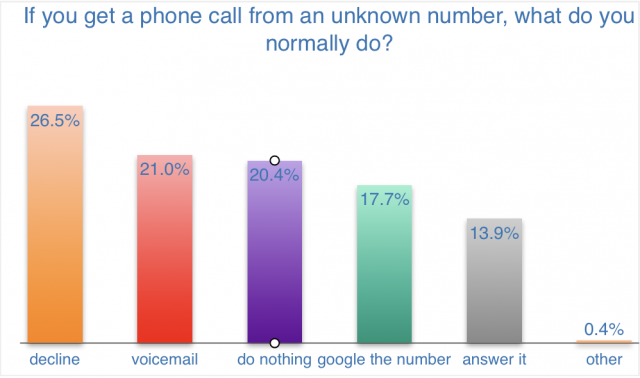 As shown, when receiving a call from an unknown number, some people decline the call (27 percent), some wait for a voicemail (21 percent), some Google the number (18 percent), and some do nothing (20 percent) – but none of these pick up the phone. Only around 14 percent of those we asked said they would actually answer the call.

As a business based around conversations, if people simply don’t answer their phone – whether because they’re anxious or they just don’t want to – what can we really do? Receiving cold calls isn’t nice, and especially not from an unknown number.

Well, there’s a couple of things we can do. First, we can consider the customer journey as a whole and take a holistic view of the communications. For example, ContactEngine may try to call a customer about their delivery details.

They may not pick up. Fair enough. But we can configure the conversation so that if there’s no answer, it leaves a pre-recorded voicemail explaining why we called and setting an expectation about what will happen next – for example, that we will send an email, and asking them to look out for it.

Or we could send an SMS – ‘We tried to call you earlier’ – and let them know what our next move will be: ‘We’ll try again tomorrow’. Adding context, or attempting contact via a different channel, makes the communications more trustworthy and increases the chances of contact.

Secondly, we can ask people when they’d like to be contacted. If a phone call is really necessary, we can ask via a written form of communication when would suit them. Our AI can interpret responses and book a slot, and they can be called back at that time by a human. If you’re expecting a call, you’re more likely to answer the phone.

As argued here, gaining permission is key to a successful phone call, and this could be a key to solving telephonobia too.

These approaches might be unrecognisable to Rachel, Monica, Phoebe, et al – but times are a-changing. Friends celebrates its 25th anniversary this year. If this much has happened, technology-wise, in just those years, I wonder where we’ll be in another 25? Hopefully Friends will still be available on Netflix, anyway.

This article was written in partnership with Zoey Planjer, Head of Customer Journey at ContactEngine.