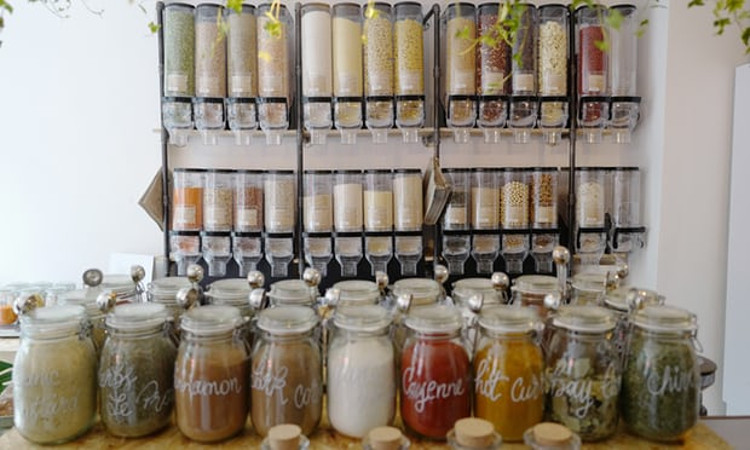 Bulk Buy: Why Zero-waste Supermarkets Are the New, Old Way to Shop

A bring-your-own containers store in east London is the latest shop to ditch packaging. But the principle of leaving nothing to waste dates back to an earlier time

There is a decidedly retro feel to London’s latest attempt at a zero-waste supermarket. The produce comes stacked in glass cylinders. Arborio rice is 62p per 100g. Pumpkin seeds are 86p for the same measure, with chocolate buttons at £1.16. On the far wall: four flavours of dry dog food, stored in the same way. Adjacent to the counter, yellow, green and umber oils, in jars with spouts: tea tree, castor, almond, peppermint, and on. On a table in the middle, the breads have all been baked by local youths who are being siphoned out of gang life. Women recently released from prison have taken care of the cakes.

It’s being sold as radical 21st-century eco-vanguard stuff, but the organising principle is the same as that familiar to a generation who grew up before plastics: you bring your own jars, sacks and pots, weigh what you want and cart it home.

Caldironi was inspired to start the shop after reading a magazine article two years ago, about a woman in New York who had created practically zero-waste in four years, accumulating only enough rubbish to fill a jar in all that time.

“I’m not your classic hippy,” she says. “I was normal! I worked for a big oil company, I was in marketing. But after reading the article, the more I delved into the problem, the more I realised that no one was actually solving it.”

It took her a year to build up the networks, and find the funding to open this, the pop-up version of a far larger shop that she is due to open in nearby Clapton before Christmas.

“That will be 100 square metres, and re-use will be built into it: my architects are going to be using discarded stage sets from the Royal Opera House.” It will also come with a beehive and a unique community composter, based on the ones that serve the Napa Valley in California.

“You remember how we talked about what a problem plastic is?” a woman explains to her kids as they pick their way through the store. “I find I use less of everything because I can buy the exact right amount,” says another customer who has already been targeting zero-waste independently. She makes her own bags, which she is keen for Bulk Market to stock. For the nascent zero-waster, they stock glass jars, steel mess tins, reusable beeswax cling-film and wooden sporks.

While she agrees that her stock isn’t cheap compared with Tesco, Caldironi also sees the cost advantage.

“When I started living like this, I was amazed to see the difference in my bank balance of only taking what I needed.”

For an era already so in love with the style tropes of the Edwardians, being back at a vintage greengrocer, drawing off olive oil from big glass jars, is on trend as well as responsible.