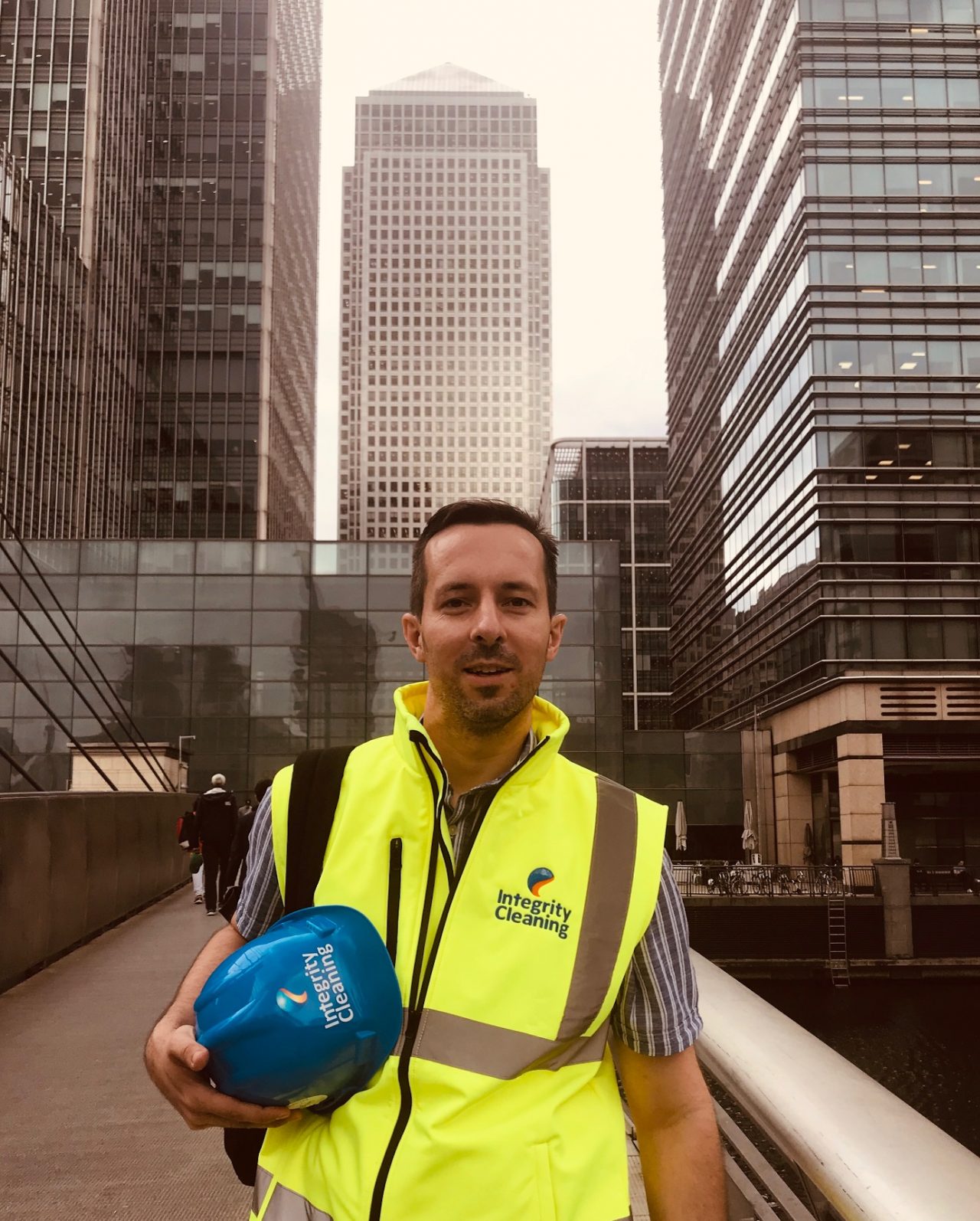 Cleaning With Integrity: An Interview With Luke Murfitt

It’s not your average job interview, but a description from Luke Murfitt, founder of Integrity Cleaning, of how one woman kick-started her career after a chance encounter shines a light on the ethos of his business.

Picture the scene: a dark, damp evening at a London train station, and after disembarking, a mother struggles with her children and bags as she attempts to scale steps up to the pavement and begin the long walk home.

“No-one else was offering, so I asked if I could help get her up the steps,” says Luke as he explains exactly why ‘supporting mothers back to work’ is more than just a media-friendly slogan for his firm

“We got to the top and I asked if I could help her further. She said she lived about a 20-minute walk away, so I offered her a lift in my car. During the drive I was able to ask her where she worked. She said she didn’t work, and that people didn’t want to employ her.

“I asked her what she would want to do, and she said she would like to be either a carer or a cleaner. I said ‘happy days, I have a cleaning company – would you like to start this week?”

It sounds like the happy ending to a feel-good film, but this was reality for the mum in this story. She was able to work as a cleaner, fitting her duties comfortably around school hours, and as a result was able to move into a larger home than the one-bedroom flat she had before. Thanks to her income from Integrity, was able to start planning for her future.

“She’s now a full-time carer, in the career she wanted,” Luke says.

“She calls me her angel, but she was pretty good to me too, working hard and driving Integrity forward.”

Integrity Cleaning has been shortlisted in the Best New Business category of this week’s 2019 UK Business Awards, and this achievement is part of the ongoing success story for a firm that was born out of personal adversity.

Luke is a former high-flying salesman at a blue-chip company, who in 2015 was handed a life-changing diagnosis of Parkinson’s disease.

But rather than allow this to limit his scope for life, Luke decided to challenge himself and use the diagnosis to spur a career change that has led to a current total of 85 cleaners signed on for employment through his company, ranging in age from 19 to the mid-60s.

“After the diagnosis, which was obviously a bit of a challenge, I realised I didn’t want to wallow in self-pity, and so I used it as a catalyst to springboard me on to do greater things, and here we are,” he says.

That route first took him to his local job centre where he was told to seek benefits following his diagnosis, but his hunger for something more led him instead to seek advice on starting his own business.

“I felt I had a lot more to give. I told the staff at the centre ‘there are people over there who are looking for jobs, and I’d like to employ them’. I wanted to set an example of what can be achieved, and they said ‘fine, go for it’. So they sent me upstairs to the next level and a department that assists in setting up businesses.”

From the window of that same building, Luke gazed out at London’s ever-sprouting skyline, with gleaming new buildings taking shape.

What was simultaneously taking shape was his own business future, thanks to Luke “turning adversary into opportunity”.

He continues: “I looked into the cleaning industry, and spent six months planning. I was careful though, as I had seen people who set up cleaning companies and ended up cleaning themselves out!”

However determination, and the hard work and support of wife Diana, pushed Luke towards realising the recession-proof nature of his chosen sector, and what it could do for them as a family, along with the wider community.

“Cleaning has grown and grown and is a massive employer. I saw it as a chance to impact many more lives and provide better opportunities, rather than with, say, an office of five people.

“With around 33,000 cleaning companies in the UK, with 700,000 cleaners, there’s plenty of scope. I knew I needed only a small portion of that to be successful, and not to fear the competition, but actually be better than them.

“And also be something that they are not, because what I realised was – not many people actually choose to be a cleaner. Instead they often ‘resort’ to being a cleaner.

“I thought to myself, these are the people I want to help. They’ve found themselves in a situation they didn’t choose to be in, but I could at least assist them and make the area of work they’re in as pleasant as possible – give them opportunities and ensure they feel respected and are able to grow, move on, and not just remain cleaners forevermore.”

Integrity continued to take shape, and the ethos of assisting mums at a crucial time of their lives grew from Luke meeting fellow parents at the school gates while waiting to collect his daughter.

“There comes a point when a lot of mothers want new working opportunities, but there are often few firms offering that. This was part of my plan – to offer such opportunities, and make a success of it.”

The company got off the ground when Luke secured a significant contract with a hotel in London’s Bromley borough, having first garnered a workforce ready and willing to put the hours in.

Low start-up costs and lots of hard graft helped Integrity gain momentum, and as the journey continued, so too did the cleaning contracts with churches, community groups, and other eager clients.

However, it was a return to the skyscrapers of central London that saw Luke land the firm’s most significant contract.

“I was at a training event and I looked out the window at these apartment buildings which were going up, 41 storeys high, and I thought ‘they need cleaning’. I had no experience of construction cleaning at all, but I walked over to the site, which had around 600 people all milling about.

“I was wearing a suit while they were in their construction safety gear, so I got some looks. I found a door saying ‘staff only’, walked in, and eventually located the project manager. I said to him, ‘Hi, I’m Luke from Integrity Cleaning, you’ve got some great buildings here, and we’d like to be the company that cleans them’.

“He told me my timing was interesting as they were just three days away from tendering for a cleaning company, so he took me to the senior management in order to apply.”

Several months later, having seen off competition from some of the biggest companies in the market, Integrity was offered the contract.

“They could see I wanted to do a good job, and we ended up replacing a company they had used for the last 25 years.”

Luke’s bold approach to securing employment for his team provided many months of solid work, cleaning 1,000 or so million-pound apartments, over four thorough stages each, to make them ready for residents.

And so Integrity rose to its current position as one of the UK’s most caring and community oriented commercial and construction cleaning firms.

“This year alone I’ve helped 25 mums back into work. Of course, helping mothers doesn’t just help them, it helps their children, families, husbands, and whoever else. It impacts lives.

“We help with their training, and we look towards assisting with transport costs, and being flexible with working hours. We’re also there to provide references for when they’re ready to move on. We work as a team, and they love it. To me, each of them isn’t merely a cleaner – they are a person; something they never normally hear in this industry.”

From year one to year two, Integrity has grown by 650 percent, and his nomination for a UK Business Award tops a hugely successful year that has also seen him share his story with thousands of listeners on radio station LBC.

“I have appeared twice on LBC’s The Business Hour, and plan to return to answer questions from listeners in the near future and share my advice.”

On the subject of advice, Luke leaves us with one final inspiring message.

“Never let a challenge – in my case my diagnosis – stop you from doing what you want to do. Never limit yourself.”