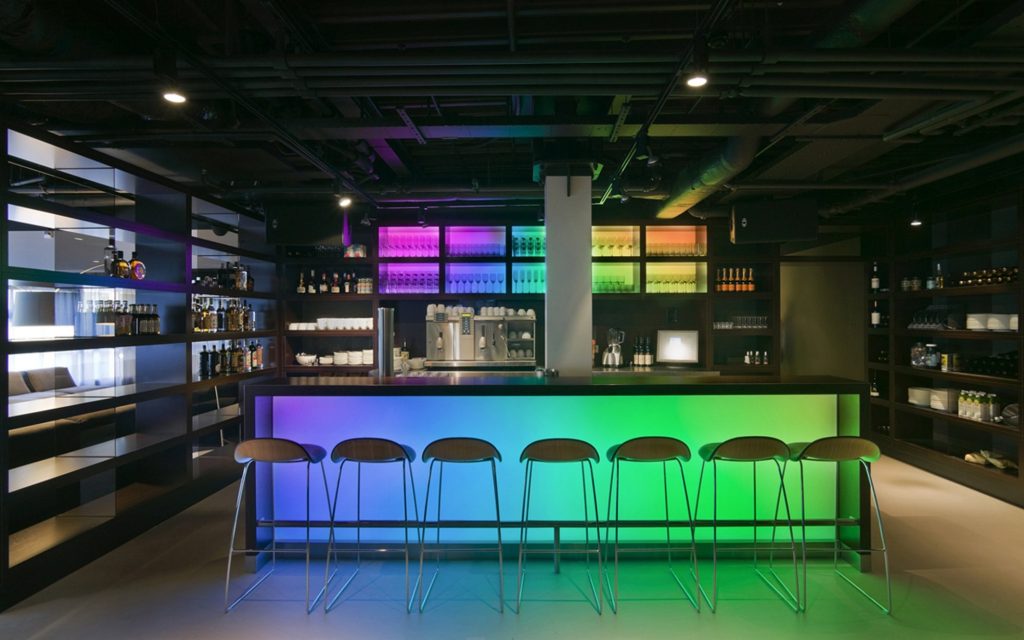 When I entered the office, it quickly became clear: this is not an average IT service provider. On our way to the meeting room, we passed through the canteen with a fully equipped bar and kitchen and a dining table that is at least 20 meters long. I sat down with their Organisational Development circle, which regularly comes together to improve the way their bossless organisation functions. Nobody held back when talking about their culture: I sensed passion, candour and strong opinions. It was clear to me that these people are 100% committed. About halfway through our conversation, the company’s chief cook brought in a delicious lunch salad, served beautifully, as if we were in a high-class restaurant.

Founded in 2003, Schuberg Philis has approximately €50mln yearly revenue and consists of 230 people. Banks, energy companies, supermarkets, airlines and government agencies rely on them to keep their mission-critical IT systems 100% operational under any circumstances and at all times. Their office, with the in-house data centre, is close to Schiphol Amsterdam Airport.

A large part of the Dutch society relies on their services, so some people would expect that in order to promise such high reliability and security, you need strict control, done by management. But that is not the case, Schuberg Philis is fully self-managed and has 0% managers. Their experts are in the lead.

“People are perfectly capable to make important decisions about their own life, why wouldn’t people be able to make decisions about how they work? People don’t need a boss to tell them how to do their job“. When asked if everyone could function in a self-managed organization, he responds: “I don’t believe it has anything to do with intelligence or having a high education; being responsible for your own life is a universal value” — co-founder Philip Dries

In most IT companies, the sales department negotiates with the customer about price and scope of the assignment and then hands over the assignment to engineers for implementation. Often, the engineers discover that was promised is difficult to deliver within the promised timeframe.

At Schuberg Philis, there is no sales department. Instead, customers work directly with experts. Every customer is connected to a dedicated team of 5–10 engineers that has full responsibility and mandate. Because there is no other department telling them what to do, the teams only commit to things they can actually deliver. They own planning and manage their own budgets. Because they are the ones keeping the service online 24/7, they make sure quality is high. Therefore, it is no surprise that Schuberg Philis has the highest customer satisfaction score of any IT infrastructure company in The Netherlands, for 10 years in a row.

The engineers have a 100% focus on the customer and try to understand all aspects of the customer’s business. This leads to involvement on all levels. One engineer said: “one moment I’m working on a deeply technical problem, another moment I’m walking around the customers’ trading floor and giving them advice about their strategic direction.”

Schuberg Philis invests almost a quarter of their profits in enhancing the wellbeing of its colleagues and their families: there is an in-house psychologist, physiotherapist, sports programs and the in-house restaurant serves daily fresh healthy meals.

People decide their own office hours and when they go on holidays. Because of the high level of freedom and autonomy, there is a high sense of ownership and commitment. Engagement and retention at Schuberg Philis are very high.

People work very hard but are much happier than in their previous jobs. Due to this lack of stress, absenteeism due to sickness is low (less than 1%). There is no stress from things they can’t influence: decisions made and imposed on them by managers, there is no stress from unproductive reorganisations or unrealistic targets.

Even though there are no managers, people still want to have someone to talk to about their performance, growth and well-being. In the first few years of Schuberg Philis, one person was responsible for all performance evaluations and appraisals. But when the company grew, this was no longer feasible. They did not want to create a separate HR department because they felt this wouldn’t fit the culture of self-managed teams.

Instead, Schuberg Philis created the role of coach, which about 17 people took on next to their regular work. People select who they want to be coached by. This can lead to some coaches having no coaches. Chief DNA officer, Lotta Croiset van Uchelen calls this a self-correcting hygienic system: “by letting the individuals choose, you don’t need to create complicated policies”.

The engineers’ high sense of ownership and involvement can lead to overcommitment by team members. Coaches and team members tend to pick up these signals and are expected to give each other feedback. Vulnerability is key: asking for help is considered a strength, not a weakness.

Recruitment is done by the teams based on expertise, cultural fit, their ability to be self-reliant and work in multiple roles. Less than 5% of applicants are hired. New hires coming from corporate organisations need up to two years to get used to the level of self-management and fully ‘de-corporate’.

Because of the way they are organised, some things are more difficult than in other companies. One of them being standardisation. Because the engineers are used to innovate, they sometimes reinvent the wheel. It would be more efficient if teams would share best practices across teams and strengthen each other. But because the engineers are very autonomous, it is not easy to trust somebody else’s decision.

Another challenge is their ability to do group-decision making as the company grows. In the past, everyone had to agree unanimously (consensus), nowadays this has changed to consent: everybody has to actively say they don’t have objections. The next phase is to start experimenting with the advice process, because it allows for faster decision making, while the individual stays responsible.

There is also an increasing need to clarify who hold decision-making rights for certain domains. That’s why they recently tried Holacracy, in which roles and accountabilities are very explicitly defined. But after the experiment, they decided it’s too technocratic, too slow and doesn’t fit their culture.

“Our core belief is that people should always be able to stay responsible for their decisions, and should not be able to refer to another role that is responsible. Because circles ask for mandate from super circles, we also suspect Holacracy could lead to a top-down hierarchy of circles. Instead, we want people asking for advice before making decisions. We think it’s a stronger mechanism as compared to setting mandates and boundaries.”– Ilja Heitlager

Full disclosure: while doing my research for this article, I was asked to help Schuberg Philis as a consultant to improve their agile capabilities and some of the aforementioned challenges. The way I was introduced to the teams also says something about their culture: I had to first present and show my expertise in a knowledge sharing session, only after which I started to get requests for help from teams. In a self-managed organisation, nobody has the ability to push a consultant to teams. It will only work if there is ‘pull’.

“Although we don’t have management or hierarchy, there is still an informal hierarchy, just like with any group of living beings. Influence is gained through ability, talent and seniority. Leadership is on all levels. It’s a meritocracy.”– Lotta Croiset van Uchelen — Chief DNA officer

Even if you don’t want to completely move towards self-organization, there are several valuable lessons that can be learned from Schuberg Philis: