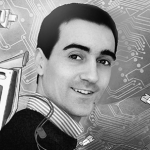 Mr. Antonio Espingardeiro is an IEEE member who was published in two scientific articles at the 2009 World Congress in Computer Science: “Implementation of Particle-based Viscoleastic Fluid Simulation” and “Network Protocols in Telepresence Systems.” Mr. Espingardeiro completed a Master of Science in robotics and automation with distinction from the University of Salford, U.K., in March 2009. Antonio holds a BEng in Industrial Informatics from Setúbal Polytechnic Institute (Portugal), an MSc in Robotics and Automation with Distinction at the National Advanced Robotics Research Centre from University of Salford, Manchester (UK) and a PhD in Information Systems specialized in Social Assistive Robots from University of Salford, Manchester (UK). He is a PhD who is constantly invited by companies to do research, involving developing and commissioning assistive technologies. He also is a very practical person.

Cybernetics and Human Augmentation: Are We Living in the Future?

In science fiction the term “cyborg” is used to describe human beings whose bodily functions are aided or controlled by some type of technology. When you consider that what this actually refers to is enhanced capabilities through technology, we’re not talking about the bionic man. In reality these concepts allow people who suffered from accidents or with current disabilities to regain or exercise a set of skills.

The truth of it is, modifying or enhancing our bodies with technology is already possible and relatively common. Every year millions of pacemakers, cochlear and neural implants are successfully implanted in hospitals and clinics worldwide – would you call that transhumanism? What about prosthetic limbs? As these become more robotic and integrated into the human body the word “cyborg” may be becoming less of a fictional concept.

Developments in the area of robotic prosthetics may currently be seen in many different forms – Dawn O’Leary, a woman from Maryland who had both arms amputated after an accident was fitted with a prosthetic hand by Touch Bionics called i-Limb that offers her similar motor control of a real arm. This technology uses proprioception sensors to pick up nerve signals from her torso and translates these into commands for controlling a prosthetic hand which can grasp and move objects using the right amount of force. In the UK, Touch Bionics already offers a range of active prosthesis.

“Rewalk” from Argo Medical Technologies, is an exoskeleton that allows people to regain certain mobility skills. Other force augmentation devices include “REX” from REX Bionics and “HAL” from Cyberdyne. These all provide a certain degree of mobility for wheelchair users with the ultimate goal being to provide alternative ways of travel for increasing the mobility, independency and quality of life of impaired users.

The most integrated examples of prosthesis combine myoelectric limbs with nerve transplants to deliver motor control with the patients actually being able to feel the objects by grip or touch.

So what about augmenting human capabilities deliberately; a move from restorative technologies to deliberate enhancement? Ethical considerations such as the privacy, accuracy, safety, cost, democratisation and access of such technologies is an area under discussion. Experiencing the world in more than five senses and being part of a “ubiquitous” world where our non-biological forms of intelligence communicate in the cloud might not be as distant as we think.

In terms of human augmentation it is possible that we will have different technologies. Not only upper and lower exoskeletons, but indeed augmented reality incorporated in glasses (e.g. Google glass) and other gadgets. Virtual reality could also extend our intellect by providing experiences that were physically not available. Lastly our mobile phones will represent augmentation devices as they are connected to the cloud and processing large volumes of information.

Any of the above areas will have direct or indirect influence in businesses. Some of the concepts are already applied, some of them are being developed but this is what you are likely to experience over the next years from a commercial perspective.

In terms of entertainment high definition cameras like Go Pro are one of the biggest choices at the moment. These cameras could be attached to a bike, car, boat, helmet, planes or equipped in drones for providing images in several scenarios.

Typical scenarios range from filming sports to wild life documentaries and even sea exploration. In haptic devices the gaming industry sells millions of racing wheels every year. With force feedback it is possible to play racing games and get the feeling of corning in a car. In health care there are already some applications that include haptic devices. These could be through the form of a “tool” that the surgeon controls in a virtual reality scenario (e.g. feeling the human body texture) or also haptic devices for rehabilitation purposes in scenarios such as helping people regaining flexibility with objects.

In education and life sciences the use of virtual reality glasses (Cyber anatomy) is becoming an important advantage when teaching medical students or high school students. In biology and anatomy with the use of VR glasses it is possible to experience 3D scenarios where matter gains life. Organs or other types of elements could be watched in interactive ways through virtual environments. The outcome is better student preparation/understanding and the ability to simulate difficult scenarios that would be almost impractical in real life.

In amateur sports, a range of sensors are becoming available. These allow monitoring heart beating rates for example when running daily. These are quite useful for practicing sports as some of them are connected to mobile phones/smart watches that run apps capable of generating performance reports.

GPS location devices are a must today.

It allows drivers to get to any location and monitor their time very precisely. It is an interesting technology that is also gaining momentum in drone technologies. Some unmanned aerial vehicles use GPS signals to locate and Go Pro cameras to film. These technologies bring additional benefits in terms of service applications/inspection for assessment and fast response systems. Drones are important technologies for fire brigade teams in the case of fires, disasters and other difficult scenarios. The drones could provide important information to the ground teams about the nature and scale of incidents/disasters.

Lastly animals are starting to use some forms of technology. This usually includes a chip under the skin with the animal’s information including its owner and address. Some of them could also use GPS tracker systems in the case they get lost.

IEEE, the world’s largest technical professional association, is dedicated to advancing technology for the benefit of humanity.  Through its highly cited publications, conferences, technology standards, and activities, IEEE serves as the trusted “voice” for engineering and other technical professions around the globe.  With a membership of more than 395,000 engineers and technical professionals across 160 countries, IEEE publishes 30 percent of the world’s literature in the electrical and electronics engineering and computer science fields, and has developed nearly 900 active industry standards. The organization annually sponsors more than 1,000 conferences worldwide.