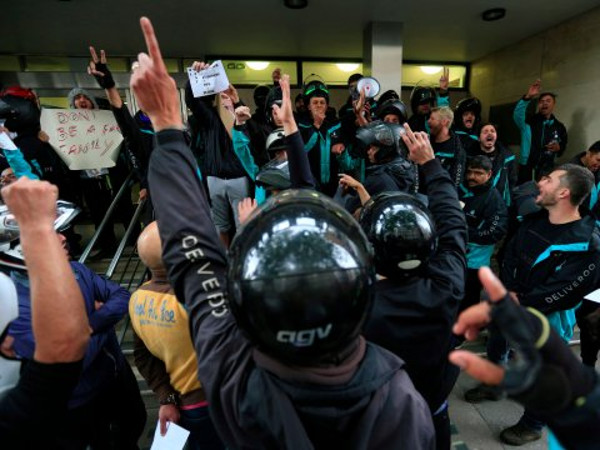 Deliveroo Will Pay Its 15,000 UK Riders Sickness And Injury Benefits If The Laws Change

Food delivery startup Deliveroo has pledged to pay sickness and injury benefits to its UK riders, provided the government changes the law around what they can offer flexible workers.

In a submission to a government-commissioned review of the gig economy, Deliveroo said the law prevents it from paying sick and injury benefits because the company classifies its workers as self-employed. We first saw the submission reported by the BBC.

Deliveroo said the government should create a new category of worker — “gig worker”. The company is also reportedly exploring enhanced payments to its riders, which would be doled out through a scheme similar to national insurance, according to the BBC.

As it stands, Deliveroo classifies its riders as self-employed, meaning they’re not entitled to certain rights like maternity pay, sick leave, and holiday pay.

The company doesn’t want to reclassify its riders as “workers” — firstly because it would have to pay for more benefits, and secondly, it says, because it could no longer offer flexible working. Workers would need to be offered set shifts, and Deliveroo says riders like the flexible nature of their work.

According to the BBC, Deliveroo might look at offering parental leave, holiday rights, and pension contributions. It’s possible riders would need to “earn” these rights over time.

Deliveroo and Uber are the two best-known representatives of the gig economy, which loosely describes the rising number of firms relying on casual rather than full-time employees. Their fast growth partly relies on the fact that they have hundreds of workers who don’t need to be paid benefits and can’t be guaranteed minimum wage.

Tales of people struggling to make a living on the gig economy, and increasing numbers of workers demanding more rights, has resulted in greater political scrutiny of firms operating in this area.