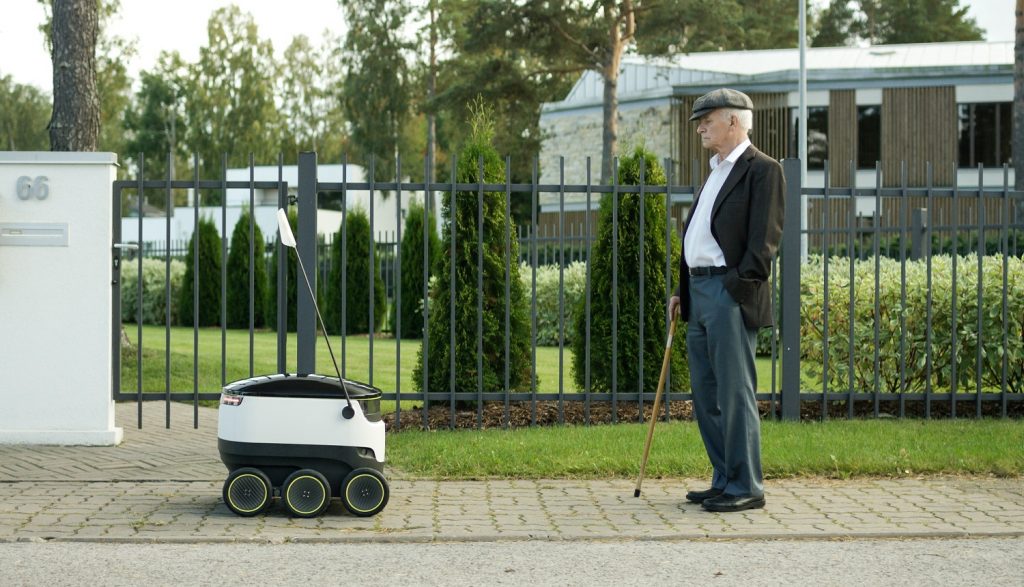 Over 100,000 people, eBay traders and businesses around the world use ParcelHero®. Our smart comparison site brings together the delivery services of the world’s biggest carriers including UPS, DHL, FedEx & DPD at huge savings of up to 60%. At ParcelHero® we are passionate about delivery and committed to industry leading quality of service. We are one of the UK’s highest rated couriers, with over 4,000 5-star reviews and a customer rating of 97%.

Delivery Wars: This IS the Droid You’re Looking For

The battle between humans and robots has begun – in the delivery industry! Starship Technologies’ new delivery droids are being introduced to the streets of London, just as UberRUSH’s new API for its on-demand delivery services mean businesses can have access to thousands of crowdsourced delivery services built into their own websites and Apps.

Leading delivery experts ParcelHero say the fight for near instant deliveries has truly begun, as UberRUSH’s new API (application programing interface) enables companies to give customers the option of having their goods delivered by UberRUSH’s thousands of (human!) drivers as an integral part of their ordering process; just as droid delivery robots go into action for JustEat and Pronto.co.uk.

Says ParcelHero’s Head of Consumer Research, David Jinks MILT: ‘Starship Technologies’ delivery robots were introduced in Greenwich, London, earlier this summer, and now the largest European food delivery company, Just Eat, and innovative London food delivery start-up Pronto.co.uk are signing up for full-scale testing of the new delivery robots here in the UK. Meanwhile, in a country not so far, far away, Uber’s new API for its on demand delivery service UberRUSH – ‘an Uber for things’ – has already taken US companies, including Google Express, by storm. Our New Hope is the API will become a catalyst for thousands of new SME businesses here in the UK; offering everything from drone hire to dry cleaning.’

‘Delivery is really where the battle for customers is happening at the moment. Convenient same hour deliveries are as important as the price of an item to many consumers: if not more so. Uber has made on-demand delivery available for every scale of business through the addition of just a few lines of code. By making its UberRUSH API available to everyone, developers and businesses alike, it is enabling entrepreneurs to create completely new types of companies. At the same time Starship Technologies, a company launched in 2014 by Skype’s co-founders, has introduced autonomous robots designed to deliver goods locally in 15-30 minutes within a 2-3-mile radius. It’s really happening, right now.’

So which is set to win the delivery wars in the UK: human or robot? Answers David: ‘The Force is strong with Starship Technologies’ delivery droids. They are already at work in London and have now gained the support of some key retailers. The dark side of UberRUSH’s hugely exiting new API is that UberRUSH is still only available in major US cities. If the heart of your business is in Salford rather than San Francisco that means Uber is missing out on huge amounts of new business.’

Concludes David: ‘In our recent report – The Uberfication of Deliveries – we predicted UberRUSH will arrive in the UK very soon. Giving UK businesses the ability to add an on-demand delivery component to

their own applications makes it more likely UberRUSH will launch here sooner rather than later: before copycat ‘unter Ubers’ poach this huge potential market. Meanwhile, the rise of the robots is already happening here in the UK, as autonomous drones are now delivering your chilli ginger salmon meal, and before long, your urgent parcels.’