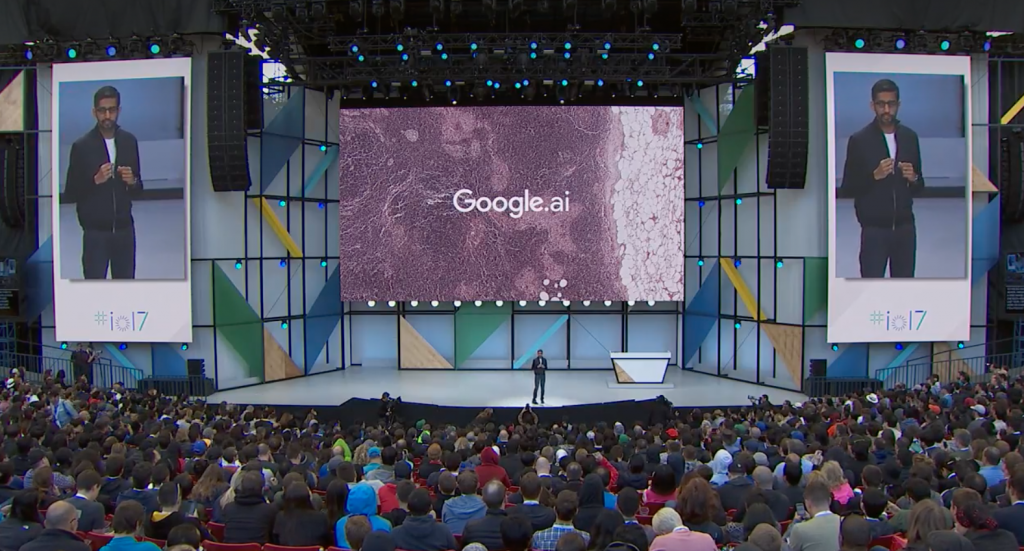 Here’s Everything Google Announced at Its Big I/O Conference

On Wednesday, Google kicked off its annual conference for developers.

Google CEO Sundar Pichai and a succession of company execs took the stage to talk up the latest milestones and to unveil new and upcoming products.

Among the new goodies: updates to Android, Google Home, Google Assistant and YouTube. As well as nifty new services like Google Lens, which uses your smartphone’s camera to identify objects in the real world.

And Google highlighted the expansive reach of its platform, with its Android operating system now installed on 2 billion devices.

Google is rolling out “Smart Reply” to over 1 billion users of Gmail on Android and iOS. The feature uses Google’s machine learning capabilities to respond to emails for you. Google Lens is an impressive technology that allows your phone to recognise objects in the real world and take helpful actions. Point your phone at a WiFi router, for example, and Lens will show you the right password. Point your phone at a restaurant on the street and Lens finds online info about the restaurant. Lens isn’t a standalone app, but rather a technology that will be baked into other Google apps, starting with Google Photos this summer. Autodraw. This is an “AI experiment” tool that was released a couple of weeks ago. It helps you learn to draw by automatically guessing what you sketched and serving up a better version. “Even I can draw with this thing,” Pichai said. Google added a lot of new features to Google Assistant, Google’s answer to Siri and Cortana. The big news: Assistant, which was released on Android last year, is now available on the iPhone. Google also added the ability to type to Assistant on your phone, so you don’t need to talk out loud to it, and Google added support for more languages. Google Assistant also now has a software development kit to let app developers connect their services to Google Assistant (and to devices that use the virtual assistant like Google Home). Google is getting serious about taking on Amazon Alexa. Assistant will soon work with Google Lens, too. So you can point your phone at something, such as a concert hall marquee, and Google Assistant will add the event to your calendar. And you can do entire transactions on Assistant, too, such as verbally ordering takeout from a restaurant that supports Assistant. Google handles all of it, including the payment and the receipt. Google also added four new features to Google Home, its smart speaker that competes with Amazon Echo. Google added something called “Proactive Assistance,” so that the device will automatically notify you of things like traffic delays and flight status changes. But the big news is Hands-Free Calling, available later this year Just say, “Call Mom” and Google Home will place a call to anyone in the US or Canada for free. It will recognise your voice, too.

Google Home has improved its music and entertainment options. You can now stream Spotify, Soundcloud and other music services on the sleek little speaker. All Home devices will also get Bluetooth features as well.

Google Home now offers “Visual Responses” which allows it to interact with your TV. Tell Home what you want to watch, and the speaker will cue up the video on your TV. Ask Home about your schedule that day, and you can browse your calendar on the big screen. Google also added new features to Photos such as Suggested Share, which reminds you to share your best photos with the other folks pictured in the photo. There’s also Shared Libraries, which lets you share all of your photos with another person, such as your spouse. And there’s Photo Books, which lets you create hard copy photo albums that Google will print out and send to you. YouTube introduced a new feature to its 360 Video app. It was available on phones and the DayDream VR headset before. But now you can can use it on your TV. Using your remote you can pan around the video. It’s especially good for travel videos or concerts. YouTube also promised it will bring Live360 to TV programming, meaning watching live streamed events on the TV and being able to pan around the scene. YouTube also updated its Super Chat feature for commenting on live videos, adding a way for the audience to actually control what happens in a video. Viewers of a video can pay to have things happen in a live broadcast (with the broadcaster’s OK). YouTube demoed this with YouTube stars The Slow Mo Guys. They agreed to get pelted with water balloons to raise $500 for charity. Google also showed off new features in Android O, the new version of Android coming this fall. It’s not a major update, but there are some new things worth highlighting. For example, you can now use picture-in-picture video, so you can watch video or video chat while doing other stuff on your phone. Other features include auto select where you can double tap on an address or phone number and it selects all of it, linked to maps or the phone app. Google also added new features in Android O for developers such as security and battery life improvements. The biggest news was that Google is adding support for a new developer language called Kotlin. You can download a beta version of Android O starting Wednesday if you have a Google Pixel phone. And it showed off virtual reality, too. The big news is that Google’s Daydream VR platform now supports standalone headsets, not headsets that need to be powered by smartphones. HTC and Lenovo will be two of the first companies to make standalone Daydream VR headsets that launch later this year. Google also beefed up Expeditions with an Augmented reality mode. Expeditions is an app for classrooms launched 2 years ago. Now, using a phone with AR mode, pictures are overlaid on top of the images on the app. Finally, Google introduced Google for Jobs, an app that takes data from job posting sites and makes it easier to search, using machine learning and AI to help narrow and personalise the search for you (such as figuring out your commute time).

Read more about this feature here.