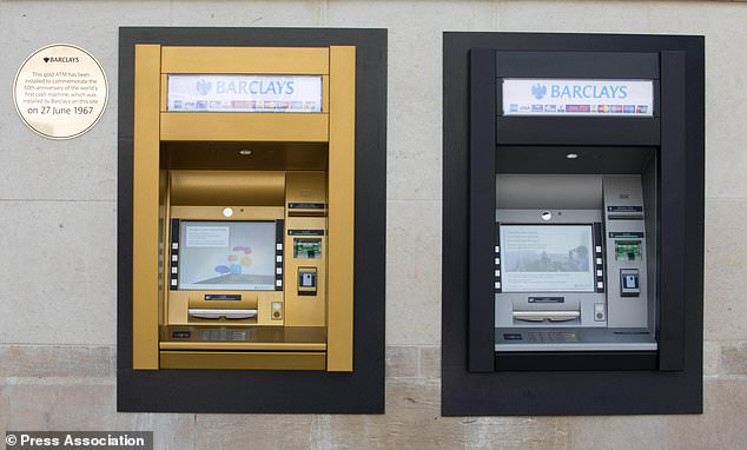 The cash machine celebrates its 50th birthday today – with the “hole in the wall” remaining a popular way for people to manage their day-to-day money half a century after it first appeared on the UK’s streets.

The world’s first ATM was unveiled by Barclays at its Enfield branch in north London on June 27 1967. As a tribute to the golden anniversary, Barclays has transformed the modern-day Enfield cash machine into gold.

The original ATM was the brainchild of John Shepherd-Barron, who was commissioned by Barclays to create six cash dispensers, the first of which was installed at Enfield.

On the Buses TV sitcom actor Reg Varney was the star of the opening and the first person to use the state-of-the-art invention, which transformed people’s ability to manage their finances by giving customers access to cash outside bank branch opening hours.

Despite the rise in other new technologies such as online and mobile banking, the ATM remains popular 50 years on.

The UK record for the most cash withdrawn in a day was broken as recently as December last year as Christmas shoppers withdrew £730 million, according to industry figures.

Trade association Payments UK recently predicted that the rapid growth in the use of contactless cards means cash will be overtaken as Britain’s most frequently-used payment method by the end of next year.

But Payments UK has said its forecast did not herald the demise of cash, as even in 10 years, cash is still expected to make up around a fifth (21%) of all payments. Raheel Ahmed, head of customer experience and channels at Barclays, said:

“Even though recent years have seen a huge uptake of digital banking and card payments, cash remains a crucial part of most people’s day-to-day lives – whether it’s paying for groceries or doing the office coffee run – and we’re very proud of the role that Barclays has played in the history of the cash machine.”

This month also marked 30 years since Barclays introduced the debit card to the UK, on June 3 1987.

Jeremy Light, managing director of payments at technology services company Accenture, said the ATMs of today are changing with the times to keep up with customers’ needs. He said:

“The ATM is changing, as it takes on a new role to complement online banking. Donating to charity, buying stamps or even applying for a credit card are all possible and may come to your local ATM.

“Smarter technology means ATMs are more secure and versatile today, for example cash withdrawals using a mobile phone instead of a card. ATMs perform an important role in the UK economy and maintain customer interactions with a bank. Perhaps cash will always be king.”

“Exciting new apps may mean we are doing more and more online but, half a century after it was introduced, the ATM still retains a crucial place on our great British high street and is key to how we access our money.”