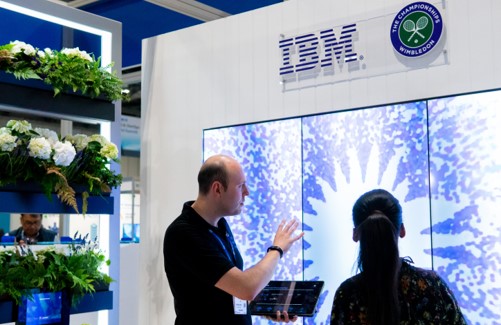 How IBM Brought Live Data to Life at Wimbledon

2019 was a milestone year for IBM, marking its 30th year as official supplier of information technology and consultant to the All England Club and The Championships, Wimbledon.

Wimbledon is the long-standing jewel in the crown of IBM’s live projects. Every year, behind the scenes, IBM analyses millions of live data points that continuously drive Wimbledon’s iconic pursuit of greatness – from match and player statistics to weather forecasts, cyber security events, and website visits.

All this is key to ensuring flawless delivery of the world class Championships and its connected fan experience.

IBM’s global agency of record and partner for over 25 years, George P. Johnson (GPJ) was last year tasked with creating an experience that raised awareness of IBM’s ground-breaking work on the tournament through innovation.

Building on the Wimbledon theme of ‘Tennis in an English Garden’, GPJ created the IBM Technology Garden, a unique real-time data activation.

Complex data sets captured by IBM were translated into mesmerising data visualisations in the form of digital flowers. These interactive visual representations of IBM’s impact on the game, the fan-experience and global media allowed visitors to read, experience, and understand how IBM brings The Championships to life through innovation.

Enticing, inspiring, and designed to encourage interaction, each visualisation constantly evolved and transformed to surprise the audience – enhanced by every serve, shot and point of the Wimbledon Championships.

The spectacle centred on watching the flowers grow as they were ‘fed’ IBM’s tournament data, made possible by GPJ’s longstanding partnership with IBM, which allowed the agency to utilise the real-time data collected for the installation.

Every flower was uniquely created based on live data and structured using biological building blocks, beautifully brought to life and nurtured in the Technology Garden.

The forms were driven by the concept of morphogenesis; a biological process that causes an organism to develop its shape. GPJ perceived this as a metaphor for the flexibility of IBM’s software offering, that can constantly change and adapt to the rising challenges imposed by Wimbledon and our ever-growing data-driven world.

Designed to reveal IBM’s hidden story, the Garden acted as a catalyst to conversations with customers at the official Championships. Whilst live data drove the activation, the focus was on demystifying and simplifying complex data sets for the audience. These were captured across five areas throughout the day with different IBM solutions:

GPJ used colours from both the IBM brand guidelines and the shades of UV light photography, a technique used by scientists to expose patterns visible only to insects; like bees that can see a wider spectrum of light than humans, to echo that there’s more to IBM’s role in the Championships than meets the eye.

To support the installation, GPJ designed an interactive iPad app that allowed audiences to navigate the live datasets, showing both the raw numbers and how they influenced a given flower.

The digital activation was built with reuse in mind, allowing highlights of the 2019 Championships to be replayed and relived. Firstly, travelling around the UK to multiple IBM events and then finally taking centre stage at IBM’s UK client centre – increasing the value of its creation for IBM by using it across multiple events throughout the year.