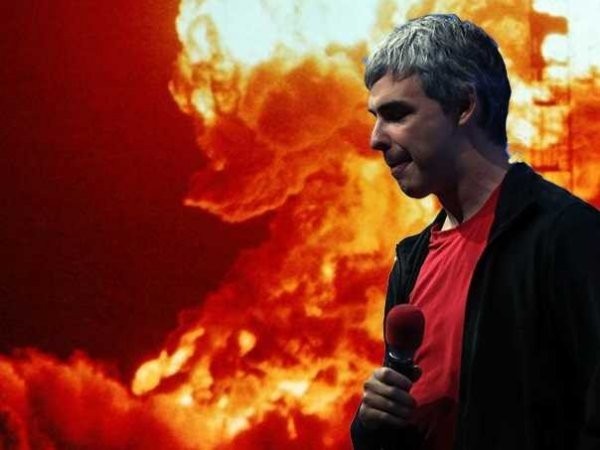 Look at The Evidence: Google’s Troubles In Europe Are Entirely of Its Own Making

LONDON — Google was fined €2.4 billion (£2.1 billion) for abusing its monopoly in Europe on Tuesday, and while Americans will no doubt bemoan the stereotype of European antipathy toward innovation this is mostly Google’s own fault.

Let’s be clear: Today’s action — the equivalent of $2.7 billion in US dollars — by European Commission competition chief Margrethe Vestager was based on real complaints about real things that Alphabet, Google’s corporate parent, has actually done. And when people outside the tech/search industry see the evidence, it doesn’t look good.

Google has, on occasion, behaved in unfair ways that hurt competition and smaller tech businesses. (For the record, Google denies wrongdoing, and you can read a statement the company made arguing its case here.)

Most of the people doing the complaining are NOT Europeans — they are other American tech companies (and their lobbyists) whose international businesses have allegedly been screwed over by Google.

Americans can comfort themselves with the image of French and Belgian politicians, sitting behind glasses of red wine, moaning about “les Americains” ruining everything for the workers, but that is not the reality.

It is obvious how dominant Google’s monopoly is, and Google has made many enemies over the years because of it.

Google is more dominant in Europe than in the US, even though it is an American company with a towering stateside presence. Everyone acknowledges Google is a de facto monopoly:

That Google monopolises search is not in itself a bad thing. Merely being a monopoly is not a transgression, even in Europe (it’s often a sign of natural success). Rather, EU antitrust law applies when companies abuse their monopoly to manipulate markets around them unfairly.

On that measure, Google has more than qualified for scrutiny over the way it distorts markets that have nothing to do with search.

The US FTC concluded an investigation of Google and chose not to pursue a case against the company. But it was a “close call,” a document leaked from the FTC said, and the document revealed a number of cases where FTC staff apparently did believe the facts showed that Google was using its dominance to manipulate the market. Here is one, where staff wrote that they believe a change to Google’s “search engine results page” (SERP) hurt traffic going to other sites:

Another part of the document said Google had scraped content from Yelp and Amazon, hurting those companies:

THE SMOKING GUN AGAINST GOOGLE

You can see that for yourself when you do any type of search. More and more frequently, Google places its own results from its own properties on top of the actual “organic” search results that its algorithm produces. In many ways, this is the smoking gun against Google. The company’s algorithm dominance is natural and not the product of unfair competition. But if the Google engine produces the best search results, why does Google feel the need to cram those results beneath its own properties?

The best evidence for this came from Yelp and a coalition of companies it has formed that believe they are being screwed out of their natural, “organic” ranking in search results because Google simply dumps its own — often less relevant — content on top of the “real” search ranking of which sites are best.

Yelp’s evidence was elegant and simple: It used Google’s own search API to create a browser extension that displayed Google search results without results that include promo boxes generated from Google+, the unpopular identity/social-network product that Google launched to counter Facebook. The extension shows you the “real” result generated by Google’s algorithm, without the self-promotional fluff that Google layers on top of it. Here is what that looks like: 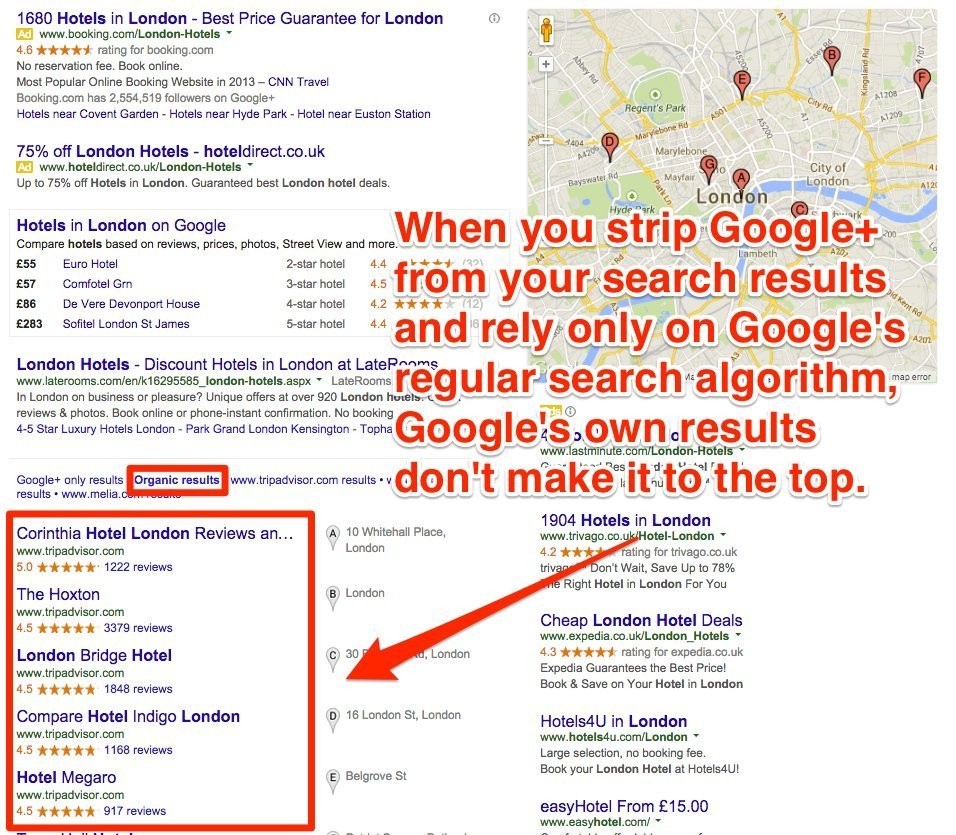 The difference is alarming. Hotel review sites like TripAdvisor — which have hundreds of reader reviews per hotel, and are thus good quality search results if you’re looking for hotels — get buried under Google’s own Google+ review boxes, in which only a handful of people have written reviews. It’s difficult to argue that Google is serving the “best” hotel results if its own algorithm is being crammed down under automatically generated promo boxes for Google’s own properties. Another example:

You should take this argument with a pinch of salt: Yelp is an avowed enemy of Google.

So compelling that the EU based its €2.4 billion fine on a version of it today. Here’s a diagram from the official announcement showing how anti-competitive Google’s shopping ads are:

Dozens of companies believe Google uses its search might dictate terms in industries in which Google itself does not compete. Expedia, TripAdvisor, Microsoft, and a bunch of smaller companies have complained that Google sets competition rules within their industries.

Even the adultery website Ashley Madison has a case: It cannot advertise on certain Google properties, but Match.com can. Google doesn’t run dating sites, but it sets the rules through which they can advertise against one another.

Over the years, all these complainers have piled up into a veritable tidal wave of discontent against Google. The company, because it is so successful and so dominant, has created an army of enemies that want to see it brought down.

Today, they scored a rare victory against a giant that until now had looked bulletproof.

If you’re interested in following the latest digital trends and becoming part of one of the most important events in the calendar for digital and CX professionals in the UK, you should check out The UK Digital Experience Awards.