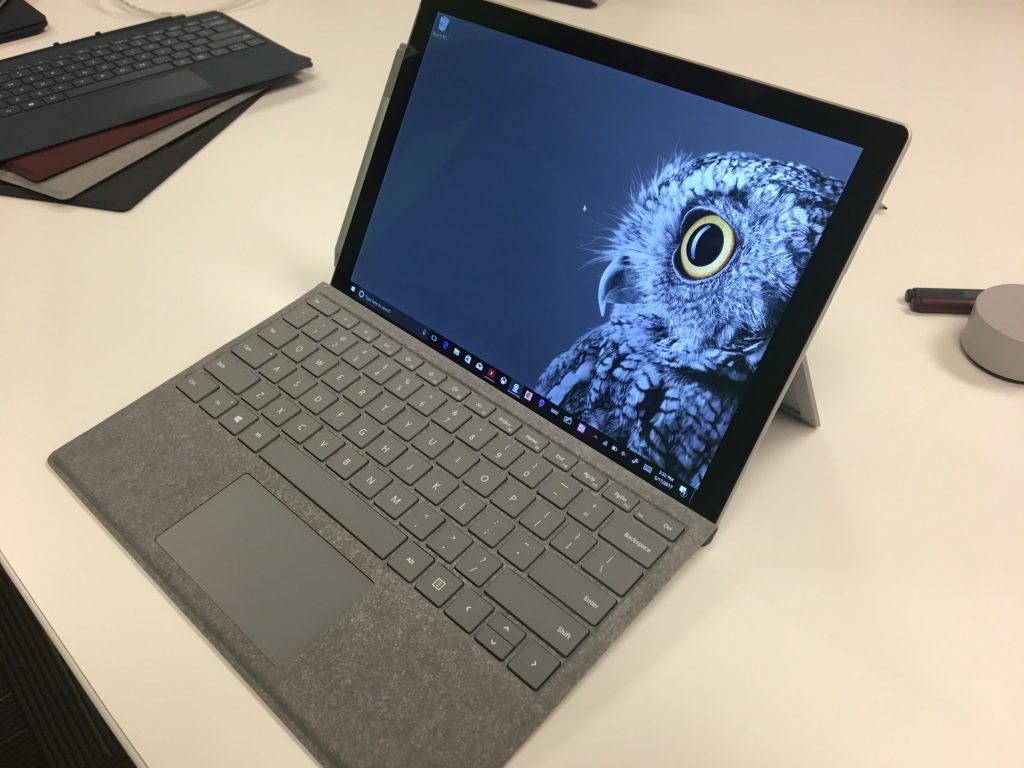 This new Surface Pro — Microsoft has officially ditched the numbering of new models — is available for pre-order today starting at $799, ahead of its official release on June 15. That’s the same day the new Surface Laptop goes on sale, too.

While the Surface Pro’s specs have been upgraded across the board, including the newest 7th-generation Intel processors, the biggest single upgrade is the battery life. Microsoft claims the new Surface Pro can get 13.5 hours of battery life on a single charge, depending on how you use it. By Microsoft’s calculations, that’s 50% more than the Surface Pro 4.

Furthermore, for an upcharge, you’ll be able to buy a Surface Pro 4 with LTE cellular wireless connectivity — a first for any model of Surface Pro.

Otherwise, the look and feel of the new Surface Pro is pretty much the same as the previous model, apart from a few tweaks, as you can see in the photos. It’s a little thinner and lighter, at 8.5 millimetres of thickness and weight starting at 1.69 pounds, with a 12.3-inch screen. The new Surface Pro sports a kickstand that can go very low —15 degrees low, to be exact.Matt Weinberger/Business Insider

The biggest change on the design front is some changes to the venting around the edges: With the exception of the Surface Pro models powered by Intel’s i7 chips, all other models will ship without a computer fan to keep the devices cool, making them run more quietly.

Also, the kickstand hinge on the back can now go all the way down to about 15 degrees, ideal for sketching and note-taking, kind of like how Microsoft’s Surface Studio desktop PC dips down.

So here’s the catch…

Like previous iterations of the Surface Pro, the $799 starting price comes with some caveats: You’ll need to buy the Type Cover keyboard, sold separately starting at $130, to make it into a full laptop. And unlike previous Surface devices, it won’t come with the Surface Pen stylus. That’s another $99, if you want to use the device to sketch.

But both accessories have gotten an upgrade: Microsoft promises that the new keyboard is better and more responsive than ever, while the Surface Pen is more pressure-sensitive, and lets you put it flat on its side to shade like a pencil. Microsoft is making both accessories available in a set of new and complementary colours. The new colours of Surface Pro Signature Type Cover. These high-end models are covered in alcantara fabric and go for $159 a pop — but they turn the Surface Pro into a proper laptop.Matt Weinberger/Business Insider

The good news is that if you’re an existing Surface Pro 4 owner, your existing Type Cover and Surface Pen will work with the new Surface Pro with no problems.

On a final note, and despite a reliance on those accessories, Microsoft is actually moving away from the Surface’s long-time marketing tagline, “the tablet that can replace your laptop.” Instead, the new Surface Pro is being marketed as “the most versatile laptop on the planet,” signalling a move away from labelling it a “tablet” at all.