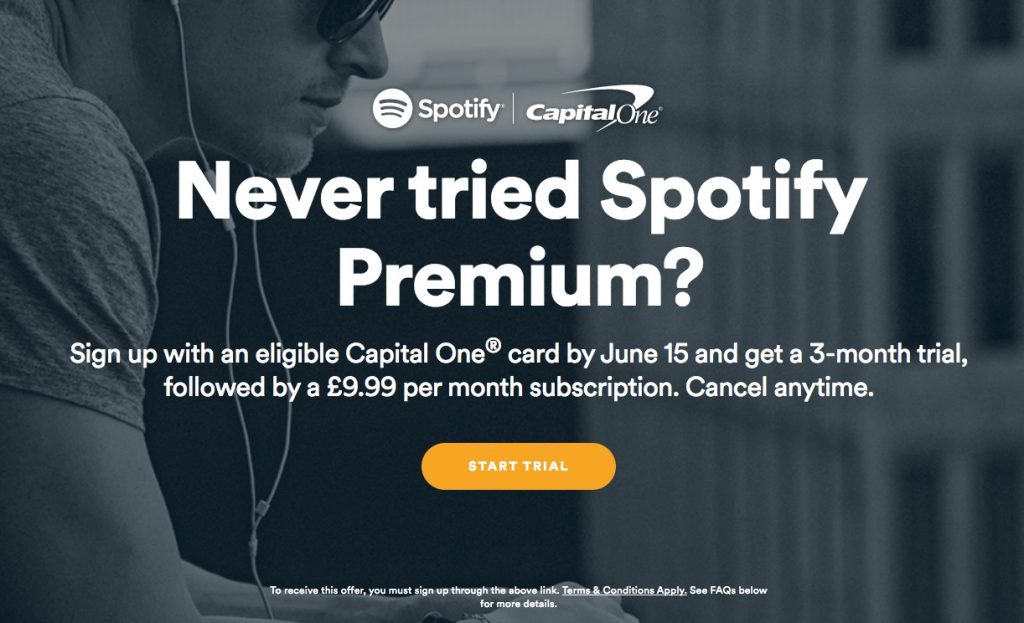 Is This Partnership Between Capital One And Spotify The Future of Credit-card Rewards?

Reimbursement will show up automatically, reflecting a larger trend in recent credit-card rewards.

This is how redeeming your credit-card rewards might look in the future.

The credit card company Capital One COF, -0.79% and music-streaming subscription service Spotify announced a joint deal Tuesday to give cardholders who have Capital One’s Quicksilver card 50% back on their Spotify Premium subscription if they sign up by April 30, 2018. Spotify Premium costs $9.99 per month, after a free 30-day trial. It does not have any advertisements, unlike the standard version of Spotify, which does play ads between songs.

The offer is available to new and existing Spotify Premium users. To get the deal, card holders must have a card that is open and in good standing at the time they hope to redeem their credit. Card holders will also still get the 1.5 times cashback the Quicksilver card offers on their purchase.

What’s notable about the deal, though, is how easy it is to redeem, reflecting a larger trend in recent credit card rewards in recent months. Once cardholders purchase their subscription, they will see 50% of the price automatically added to their Capital One statement as a credit. That “simplicity” was important, said Lauren Liss, Capital One’s lead of digital partnerships for U.S. cards. She said allowing redeeming rewards as a statement credit automatically and without extra effort is something customers want.

Capital One isn’t the first company to compete on making credit-card rewards easy to redeem. U.S. Bank USB, +0.76%   announced a credit card, the Altitude Reserve Visa Infinite Card, in April that automatically reimburses customers when they make up to $325 in travel purchases. JPM, +0.78%  ad already offered that perk as well on its popular Sapphire Reserve card, which offers up to $300 in statement credits on travel-related purchases.

In a competitive credit-card market, making redemption easy is one way for card issuers to make themselves stand out, said Michael Landau, the payments lead for the financial technology practice at professional services firm PricewaterhouseCoopers. Consumers don’t want to go through extra effort such as visiting additional redemption websites to redeem their rewards, he added.

Of course, card issuers and subscription services will win, too, if there are more partnerships like this, Landau said. But there’s a risk that users will credit-card hop, opening and closing cards in order to get rewards. Card issuers want customers to keep making charges on their cards, rather than simply opening cards to get sign-up bonuses and then closing them.