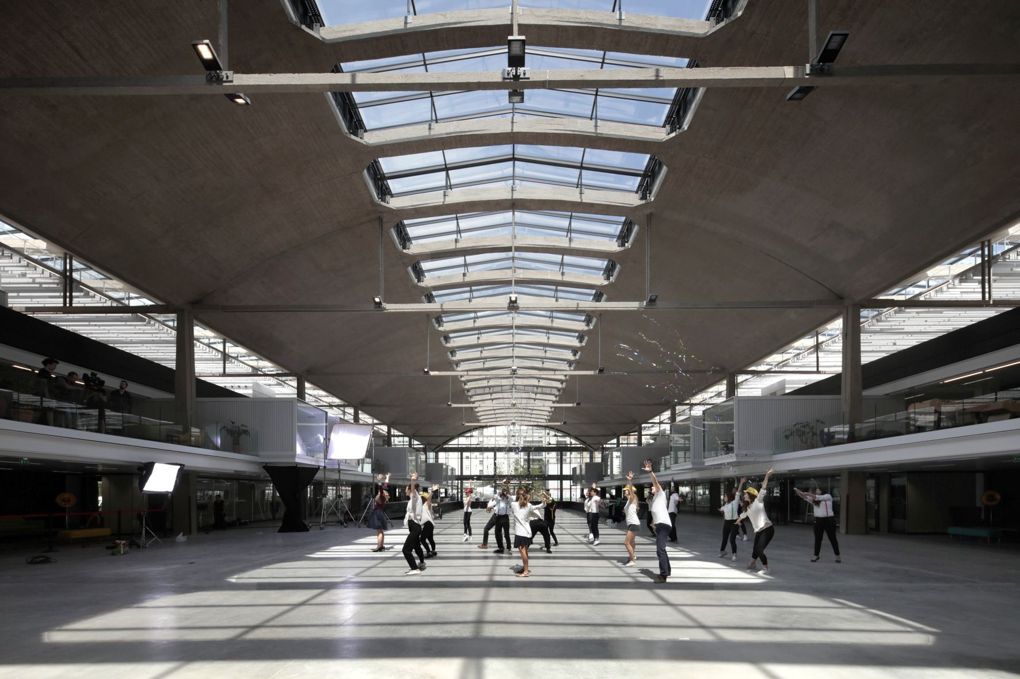 The world’s biggest startup campus is opening today in Paris’s 13th arrondissement. Based on a former railway depot known as la Halle Freyssinet, the 34,000m2 space will accommodate more than 1,000 startups and counts as founding partners companies such as Facebook and Microsoft. WIRED speaks to Station F director Roxanne Varza.

WIRED: Station F is finally opening today. Can you describe the architecture of the campus and the philosophy behind the design of the space?

Roxanne Varza: The building is a historical monument from the 1920s that is converted into a massive workspace for startups. The original building was used as a freight station and now it’s become a workstation. Can you see now where we get the name Station F from? Our architect, Jean-Michel Wilmotte, transformed the building but kept a lot of the original architectural elements. It has a very industrial look and feel, including the original concrete and shipping containers that have been transformed into meeting rooms.

That said, we have created a space with a lot of different types of workspace because we know that sometimes startups want to collaborate and share, and sometimes they want privacy to concentrate and get work done. We have different types of meeting rooms and event spaces for formal and informal events, including a “Creativity Room” that is designed for maximising creativity. Everything we did – even from a design perspective – has been tried, tested and validated by startups. We really wanted to make sure that we created something that fits their needs. Tell us about your role at the campus and about some of the initiatives that you’re planning.

Where to start?! Station F is the biggest startup campus in the world, based in Paris. The building is a 34,000m2 historical monument from the 1920s that has been converted into a massive startup space – it’s literally the size of the Eiffel tower lying down. We consider ourselves a startup campus because we will have an entire ecosystem on-site with startups, investors, public services, various startup programmes and more. We’re also launching a housing extension next year for 600 entrepreneurs to live ten minutes away. So it’s in many ways like a university campus – but for startups.

The building is cut into three parts. The first part has a lot of services and event spaces: a 360-person auditorium, private meeting rooms, private offices, public services for startups, an on-site coworking coffee shop open to the public, a fablab, a post office and more. The second part of the building is the startup zone. This area has 3,000 desks and can host roughly 1,000 startups. We host 21 different programs startup programmes in this area, for startups for different verticals or stages of development. These programmes are run by actors like Facebook, Microsoft, Naver, HEC, Numa, Ubisoft and more. And finally, the third zone is a massive restaurant open to the public 24-7. It can sit 1,000 people and has four kitchens and a bar. It will be open a little later this year.

We’ve had a lot of startups tell us that Brexit, Donald Trump and high Silicon Valley prices are what encouraged them to look at Paris and Station FRoxanne Varza, Station F director.

That’s a pretty exhaustive rundown of the building – but our initiatives go a bit further. We are really looking at making entrepreneurship more accessible. We want anyone from any background to feel they can become an entrepreneur and have access to the necessary resources. It’s not just for MBA or engineering school grads. We want more international profiles, more women and also more people from underprivileged backgrounds creating startups.

How did the idea for Station F first came about?

The idea from Station F came about in 2013. Xavier Niel – who is the man behind the project – noticed that the French ecosystem had a lot of great startups, startup programmes, investors, etc. but all very small and dispersed. People would compare Paris with London or Berlin. They would see Silicon Roundabout and Google Campus in London, they would see the Factory in Berlin. The idea was therefore to create a big emblematic space to bring the ecosystem together and provide services and space, especially to young startups that often struggle to find space and resources within their budget.

The initial idea was a massive incubator but over time we realised that we were much more like a university campus with various programmes for startups, event spaces, services, and soon-to-come housing.

How did you first get involved in the project?

I’ve known Xavier since my days at TechCrunch – we met at an event in 2010. When he started thinking about the project, he reached out to me and asked my opinion and my thoughts. I visited a number of different spaces around the world and we ended up bouncing ideas around. Eventually he invited me to meet the architects and offered me the job. It was about as simple as that. This is one of Europe’s most ambitious startup projects to date. What does it symbolise for the French tech community?

I think it really captures the state of the French ecosystem at the moment – even though the project isn’t meant to be Franco-French in any way. It’s a great place to launch a startup – the funding is here, the engineering talent is here, there are tonnes of resources for startups and the government is paying attention. The French ecosystem has actually been advancing very well for quite some time now – maybe the last few years. But I think perhaps with Brexit, Donald Trump and high prices in Silicon Valley, the French ecosystem feels it now has a new role to play – especially with president Macron’s recent election. Station F is just going to accelerate what is already going on.

What’s your vision for the project?

I absolutely love this project – but I really wanted it to be more than just a massive startup space. I want to be sure that everything we are providing is really of value. We have talked to literally hundreds of startups and various players from the ecosystem to gather their ideas and feedback. We learned a tonne and we have built Station F around what they told us they wanted and found useful. We cut out a lot of the “noise” and just focused on what was essential for them.

I’ve also really worked hard to be sure that this campus is as international as it can be, whether it be the startups, the investors, the various programmes and partners. I really did not want this project to be Franco-French but diverse and international.

Finally, I also really want to make sure that we integrate as much diversity as possible into the project. That means we’re striving for international profiles – but also more women entrepreneurs or entrepreneurs from underprivileged backgrounds.

Xavier Niel said that the main idea for Station F is to help people coming mostly from poor suburbs. Can you comment?

We are launching the Fighters Program – which will be the 23rd startup programme at Station F – dedicated to entrepreneurs from underprivileged backgrounds. This programme is dedicated to people who may not have access to fancy schools or whathaveyou. They may come from poor suburbs or rural areas, be immigrants who have had lots of difficulty, refugees or simply people with difficult personal stories. After the Brexit referendum and with a renewed American isolationism, do you think Paris can provide a different kind of hub for global startups? Is Station F part of a strategy to attract talent that no longer feels welcomed in London and in America?

Definitely – and we’ve actually had a lot of startups contact us telling us that Brexit, Donald Trump and high Silicon Valley prices are what encouraged them to look at Paris and Station F. That said, there isn’t a specific strategy to attract startups as a result of Brexit, Donald Trump or whathaveyou. We simply want great entrepreneurs from around the world to come to our campus because they want to.

The French president, Emmanuel Macron, is going to be at the opening. What does he represent for entrepreneurs in France?

He is very well-liked by the ecosystem and was a great a great spokesperson for us when he was finance minister. I think the ecosystem is also very pleased he is president because the other option wasn’t really in-line with many of the ecosystems values. He also has a very atypical profile and story in many ways and kind of represents a new, innovative, younger France.