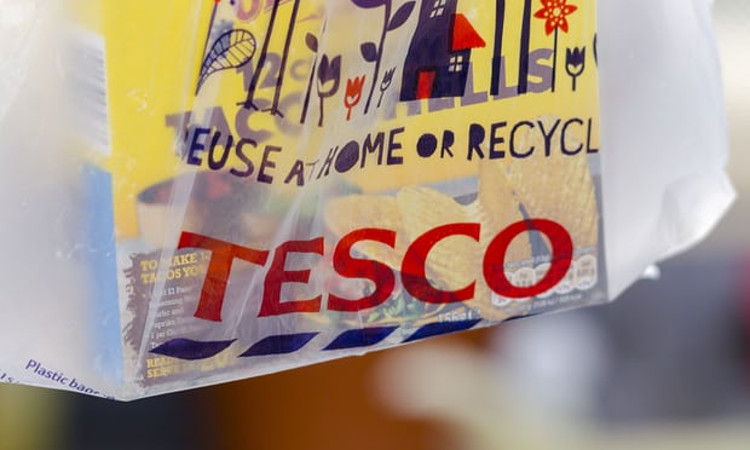 The UK’s largest retailer is to stop selling “single use” 5p carrier bags in its UK stores from the end of the month, instead offering shoppers reusable “bags for life” costing 10p.

The move by Tesco follows a 10-week trial in Aberdeen, Dundee and Norwich, which led to a 25% cut in bag sales as shoppers either brought their own or switched to the bags for life.

The more expensive bags are made from 94% recycled plastic and would be exchanged without charge when damaged, the supermarket said.

Tesco has handed out 1.5bn fewer single-use bags since the introduction of the carrier bag charge in England in 2015, but still sells more than 700m each year – the highest among the major supermarkets. It said ending sales of single-use bags – from Monday 28 August – will significantly reduce the number of bags sold and would, therefore, help to reduce litter and the number of bags sent to landfill.

Tesco said online shoppers could still opt to receive deliveries in single-use bags after the end of store sales, although just over half already choose a bagless delivery. Tesco’s announcement follows a similar move by Sainsbury’s.

Money raised from sales of the more expensive bags for life goes towards community projects – similar to other supermarkets’ charity donations after the introduction of plastic bag charging. Tesco’s scheme has so far paid out £33m to more than 6,400 groups.

“The number of bags being bought by our customers has already reduced dramatically,” said Matt Davies, UK and Irish Republic chief executive at Tesco. “[This] move will help our customers use even fewer bags but ensure that those sold in our stores continue to fund thousands of community projects across the country chosen by customers.”

The introduction of the 5p charge in England in October 2015 brought it into line with schemes already operating in Wales, Scotland and Northern Ireland. The charge was part of a government scheme to reduce litter and protect wildlife, given that plastic bags can take hundreds of years to break down.

About 8m tonnes of plastic makes its way into the world’s oceans each year, posing a serious threat to the marine environment. Experts estimate that plastic is eaten by 31 species of marine mammals and more than 100 species of sea birds.

The charge in England has clearly worked – official figures last July revealed that the number of single-use plastic bags used by shoppers plummeted by more than 85% after the introduction.

More than 7bn bags were handed out by seven main supermarkets in the year before the charge, but this figure plunged to slightly more than 500m in the first six months after the charge was introduced, the Department for Environment, Food and Rural Affairs said.

“Since we introduced the 5p charge in 2015, the number of single-use plastic bags taken home has plummeted. I welcome Tesco wanting to go further and help their customers use even fewer plastic bags.”

“We are concerned that the difference between a five and a 10 pence charge may not be sufficient to change buyer behaviour further, given the volume and longevity of the material used in a plastic bag for life. We keenly await the results of the change across the business to see if customers will be using their bags again and again.”