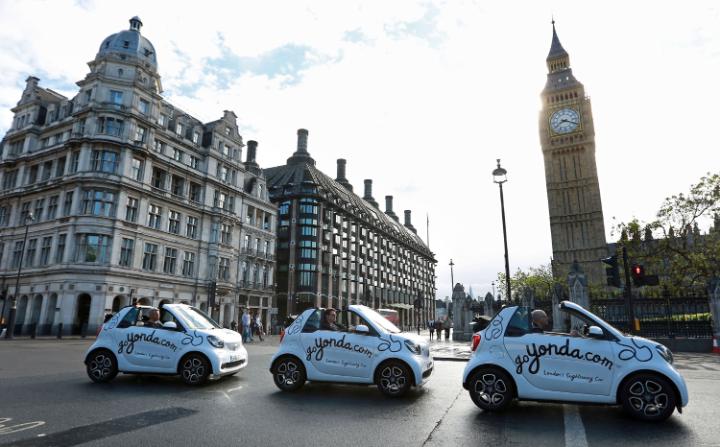 The first ever self-drive guided tour of London has launched and, for drivers who can multi-task, it beats sitting on an open-top bus.

When I stepped into the eye-catching Smart car being offered by Yonda, a new touring company, I was concerned that only more confident drivers should attempt a history lesson at the wheel.

But I needn’t have worried. Yes, the thought of taking on central London traffic while trying to process what made a duke a duke was daunting.

But in reality, in no small part thanks to the stop-start traffic that clogs up most of central London, it was rare that our little car revved up enough speed to do anything but crawl past the main sights. Slots can be booked on the Yonda website CREDIT: WWW.MATTJALEXANDER.COM/MATT ALEXANDER

Which gives you plenty of time to appreciate the guided commentary and actually learn something about the city.

Both the commentary and the tour directions are delivered from a tablet attached to the dashboard in front of you. And what makes this new concept in touring great is that the GPS is cleverly synced with the commentary.

Facts about Piccadilly Circus, say, are trotted out at exactly the right point in your journey. Yonda cars are available for self-drive tours of London from their base on Park LaneCREDIT: MATT ALEXANDER WWW.MATTJALEXANDER.COM/MATT ALEXANDER

So the slower the movement of the car, the more facts you get to hear. Sitting in a traffic jam never felt so good.

While an arrow shows your position on the GPS as you follow a marked route around London, the friendly Cockney doing all the talking breaks off when you miss a turning.

He then informs you that you need to either perform a U-turn or get back onto the right road by taking an alternative route.

The commentary – which is interesting, funny and more than a little irreverent – is aimed at foreign tourists with an interest in the Royal Family, David Beckham and films.

There are lots else, however, for those who consider themselves Londoners.

The emphasis is on stories that are loosely linked to the buildings that pass by. Such as – did you know that Harrison Ford’s fedora in Indiana Jones came from Swaine Adeney Brigg – the traditional hatters found down Piccadilly Arcade, Jermyn St?

Or that the statue of Eros at Piccadilly Circus is not actually Eros at all but his twin brother, Anteros?

If the discovery of fascinating facts becomes too much of a distraction, rest assured that the company has taken out fully comprehensive insurance and there is a handbook on what to do if you have any prangs, or want to stop and get out of the car for a wander.

The tours are expected to take up to an hour-and-a-half and are ideal for people who want a fun little jaunt around central London before exploring areas in more detail on foot.

Cars are picked up from Yonda HQ, which is located at the bottom of the ramp at the vehicle entrance to the Q-Park underground car park on Park Lane.

The tour takes in Mayfair, Pall Mall, Soho, Covent Garden, Trafalgar Square, Whitehall, Parliament Square and Buckingham Palace and costs £60 (including insurance) per two-seater car, seven days a week, between 10am and 6pm.

Yonda (goyonda.com) says it has environmentally friendly electric versions of the car on their way, along with four-seater vehicles.