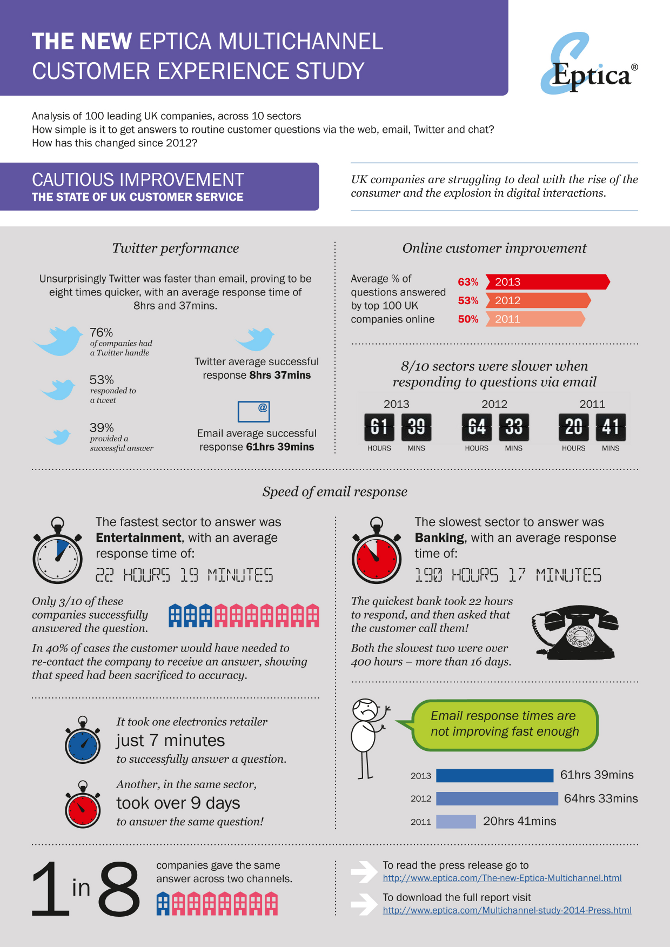 Reading, 25 March 2014: Many UK companies are still struggling to deliver adequate customer service through the web, email, social media and web chat channels, with Twitter performance particularly patchy according to a new study. Only 39% of companies were able to answer customer service questions asked through Twitter – despite 76% of organisations now being contactable through this channel.

The Eptica Multichannel Customer Experience Study, released today, evaluated 100 leading UK companies on their ability to provide answers to 10 routine questions via the web as well as their speed and accuracy when responding to email, Twitter and web chat, repeating research carried out over the past two years.

The study reveals that consumers were more likely to get an accurate answer via email than Twitter, with 41% of companies successfully responding to email. However, more and more organisations have removed the opportunity for non-customers to email them. Nearly a third (29%) of companies were uncontactable by email, compared to just 13% in 2011.

On average it took 61 hours and 39 minutes (nearly three whole days) to get a response via email, a minor improvement of 3 hours from last year. Eight out of ten sectors answered email slower than in 2012. In contrast the average response time for Twitter was 8 hours and 37 minutes, although one company replied in just 4 minutes.

“The web, email and social media are fast becoming the channels of choice for consumers, yet the biggest brands in the country are struggling to cope,” said Olivier Njamfa, CEO, Eptica. “In particular, when it comes to Twitter companies are playing a dangerous game by establishing a presence and then failing to engage with customers. This could well backfire, leading to negative feedback spreading through the social network and damaging their overall brand. Companies need to focus resources to deliver a consistent, high level and above all, fast, customer experience across every channel if they are to win and retain consumer loyalty and appeal to today’s demanding customers.”

The in-depth study, carried out by multichannel customer interaction management software provider Eptica, found that the most accurate mainstream channel was the web. Companies were able to answer an average of 63% of questions asked on their websites (up from 53% last year). Much of this improvement was down to increased use of web self-service software which lets visitors find their own answers to their queries, with over half (53%) of companies now deploying these solutions.

For the third year running fashion retailers led the way, successfully answering 79% of questions via their web sites. However, 36% of the top 100 companies scored worse than in 2012, with entertainment and electronics retailers bringing up the rear, answering just 52% of questions asked via the web. Gaps are opening between best and worst – nearly a third of companies (32%) failed to answer more than half of the 10 basic questions they were asked online, yet 22% scored eight or more. There are major differences in performance, even in the same sector. For example, one entertainment retailer scored 100%, yet two competitors just 20%.

For the first time, the research looked at consistency across multiple channels, and uncovered a piecemeal approach to service. Just 12% of companies gave a consistent response to the same question asked through email, Twitter and (where available) web chat. Several directly contradicted themselves on different channels, with one company giving three diametrically opposed answers on email, Twitter and web chat.

Many companies that were strong on one channel were weak on others – for example electronics manufacturers answered an average of 70% of questions asked on the web, but just 30% of emails or tweets. In contrast telecoms companies responded successfully to 60% of tweets, but just 10% of emails.

There is also a shrinking choice of channels available to non-customers looking to contact organisations. Just over half of companies (55%) offered two channels (normally email and Twitter) alongside their websites, but 5% provided no way of contacting them through digital channels, forcing potential customers to pick up the phone to find out information.

“Our research shows that, for most companies, the idea of multichannel customer engagement is a distant dream,” said Olivier Njamfa, CEO, Eptica. “Many appear to have focused resources on particular channels, ignoring others. This not only risks alienating customers but actually pushes up costs, as they run silo-based, inconsistent, channel by channel activity that is more expensive than a single, multichannel operation.”

Web chat was the final channel surveyed and provided the greatest accuracy (93.5%) and fastest response, with an average conversation time of just 4 minutes and 29 seconds. However, just 7% of companies offered reactive chat, despite industry studies showing that it increases efficiency, helps sales and is well-accepted by consumers.

Eptica Multichannel Customer Experience Study methodology
In total 100 company websites across the insurance, travel, entertainment retail, food retail, electronics retail, consumer electronics manufacturers, utilities, fashion retail, telecoms and banking sectors were evaluated in three areas in Q3 2013:
1. For their ability to answer ten basic, sector-specific questions via their website, such as “What is your returns policy if I change my mind after purchase?” (retailers) and “How do I cancel my contract?” (telecoms suppliers)
2. On the speed and accuracy of their response via the email, Twitter and web chat channels
3. On the consistency of responses across email, Twitter and web chat

The full Eptica Multichannel Customer Experience Study, which includes a detailed sector by sector breakdown of performance and full analysis, can be downloaded from http://www.eptica.com/Multichannel-study-2014-Press.html

An infographic illustrating the results is available at http://www.eptica.com/IMG/jpg/The_Eptica_Multichannel_Customer_Service_Study_Infographic.jpg .

About Eptica
Eptica is the European leader in multichannel and multilingual customer interaction management software, covering the email, web, social media, web chat and agent channels. Available on premise or as a Software as a Service (SaaS) solution, Eptica’s suite enables organisations to improve engagement with customers, increase efficiency and drive sales by delivering fast, consistent and personalised responses to their queries, through their channel of choice.

Today, more than 400 organisations across all industries and in 15 countries rely on the power of Eptica’s platform. They include Axa, Dixons, Domestic & General, AirAsia, Hastings Direct, L’Occitane, TUI, Debenhams, Capita and Ageas Insurance Solutions. Eptica’s continuing innovation and strong performance has resulted in the company’s inclusion in Gartner’s 2012, 2011 and 2010 Magic Quadrants for Web Customer Service. Olivier Njamfa – CEO
Olivier Njamfa co-founded Eptica in 2001 and has overseen its growth. He has over 25 years experience within the European software industry, working in management and sales roles for companies in the business intelligence, data mining, eCRM and accounting sectors. He is a graduate of ESC Rouen, and holds an MBA from the ESCP in Paris, France.