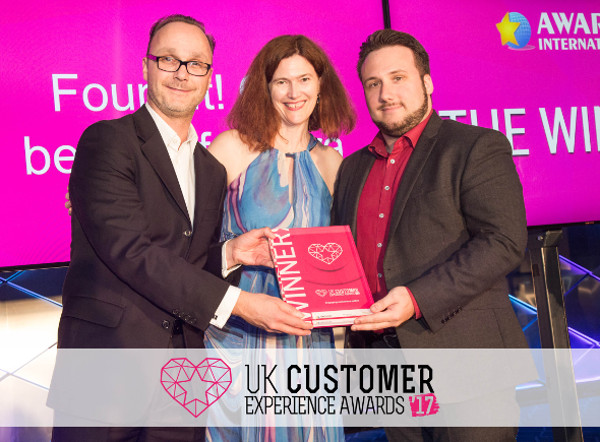 The London-based data platform firm, which helps digital retailers streamline services for customers, provided one of the biggest upsets of the evening when – on behalf of luxury online retailer Amara – it clinched the Engaging Customers Online award.

The shock was the result of who the young firm beat to take the award back to their offices – none other than communications behemoth EE, which took home the Silver award in this category.

That’s not to say the judges did not see the winning potential of FoundIt! from the start, despite tough competition from EE and the other finalists, 60K International Contact Centres and Firstsource in partnership with Now TV.

They well and truly gave it their all at presentation stage, and were able to hold their head high while accepting the award on the night, knowing it was a deserved victory.

Even so, FoundIt! COO Chris Dunn was modest when he caught up with CXM afterwards.

“It was unexpected, I have to admit that,” he said.

“It’s not that we didn’t do a good enough job – we knew we did – it’s the fact that we were up against big brands like EE. But I can safely say we are utterly ecstatic to have won.”

As with all winners, Chris and his team endured the Dragon’s Den of the judging panels during awards day, but came away knowing they had made an impact.

“We were the last to see the judges in our category, so we feared that might hinder us. But we were engaging and we had a very very good story to tell. This sort of thing isn’t our usual gig, but we knew we had impressed, and it’s great to be recognised like this.”

Chris added: “After we won we barely had a chance to sit down again, as we were mobbed; we even had a number of academics coming up to us, keen to know more right away about what it is we do – in terms of networking this has been an invaluable experience for us.

And now we have to prepare all over again, as we have been nominated for a UK Digital Experience Award…here’s hoping we can match our success upon our return to Wembley in November.”