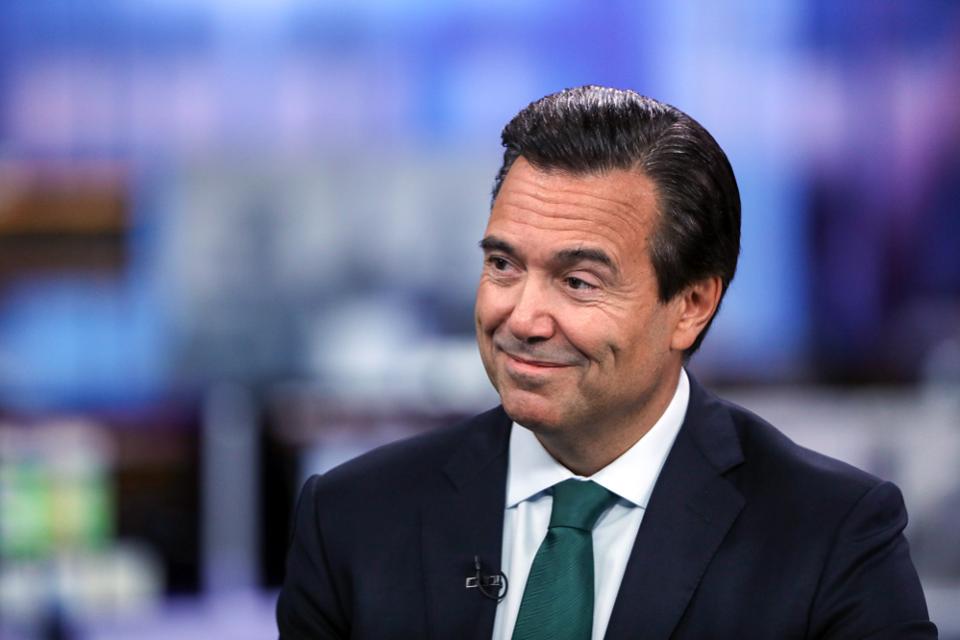 Extensive Read: Lloyds Bank CEO Weighs in on Brexit And The UK Economy

Lloyds Bank, the largest retail bank in the UK, has been in the headlines for a variety of reasons this year. The bank completed its reprivatization after the UK government sold its remaining shares last May and, at the height of the global financial crisis, Lloyds received a £20.3 billion rescue package, which gave the UK government 43 percent ownership of the bank.

Today, Lloyds is back in private control with the government making a profit of £900 million.

At Lloyds’ helm is CEO Antonio Horta-Osorio who has been leading the bank since 2011. The Portugal-born banker has been instrumental in turning the bank’s fortunes around. The process wasn’t devoid of challenges since the rescue was considered one of the largest bailouts in the crisis.

Antonio Horta-Osorio later facilitated the fiscal turnaround of Lloyds. The bank divested, closed branches and cut jobs in order to reduce costs. Ultimately, the bank was able to return to profitability. Lloyds is definitely in a much better standing now, reporting profits of £4.2 billion in 2010 – the bank’s biggest since the crash.

Today, Brexit remains a key issue in British finance. Uncertainty looms as Brexit is set to affect all economic sectors. Antonio Horta-Osorio acknowledges the new set of challenges posed by Brexit for financial services but remains reassured by the robustness of the UK economy.

Still, Lloyds chose Berlin as its European hub in order to maintain a foothold in the EU market. Horta-Osorio also wants Lloyds to continue doing right by its customers. Just recently, the bank announced that it will repay customers £300 million due to mortgage arrears errors.

Moving forward, Horta-Osorio is focused on continuing Lloyds’ improvement, especially in developing a multichannel experience for its customers. Despite rumours that he will be leaving Lloyds in light of the recent leadership changes within the organization, he says he remains committed to the group. In this interview, Horta-Osorio weighs in on Brexit, banking, and his plans for Lloyds.

Q: Do you believe there is a chance that the EU could break apart in the next few years?

Horta-Osorio: No – I do not believe this is a likely scenario.  The EU is a political project, a project for peace throughout Europe.  We have seen time and time again that, when facing political and economic crises, such as refugees or the euro-zone debt crisis and the Greek debt problem that the European Union has an ability not only to survive but also – over time – to adapt.  For me, the importance of this political union means there is simply too much at stake – for the likes of Germany, France and others – to contemplate failure and a disintegration of decades of effort.  Besides, there are fledgling signs that the economic situation in the euro-zone is turning, with much needed growth returning, which will help to dampen the impact of any further external shocks should they occur.  But this should not stop efforts to drive further structural reform in a number of European economies and also to the European project itself.

Q: What actions will allow the British economy to recover and the pound to strengthen again?

Horta-Osorio: One of the things that has surprised economists and the markets over the past year is the robustness of the UK economy in the wake of the referendum result.  Consumers, in particular, appeared to shrug off the implications of the vote and continued to spend, providing a key driver of economic growth over the past year. But indications from business and consumer surveys suggest the pace of economic growth slowed somewhat in Q1.  That may be accentuated by the outcome of the general election, which has left the UK facing a period of extended political uncertainty.  And then there is the uncertainty arising from the negotiations with EU-27, which is likely to be a further drag on the economy in the months ahead.

I am reassured by the nature of the economic recovery in recent years.  Low unemployment, higher house prices and reduced levels of household and corporate indebtedness mean the UK enters this period from a position of strength.  But clearly, the shorter the period of uncertainty regarding the UK’s future relationship with the EU, the better.  Businesses need certainty about the legal and regulatory environment in which they will be operating, so they can plan accordingly and make investment decisions.  And thus, a transition period that allows businesses to adapt will be crucial for the economy.

Q: Were you always driven by numbers and business, or did you have any other career dreams as a young adult? Was there any other profession you would have gone into or was business always your focus?

Horta-Osorio: Growing up in Portugal, I knew, even from the age of nineteen, that banking was the career choice for me.  At university, I really liked both Finance and Marketing and thought Banking was where those two subjects would be most valued.  As a retail and commercial banker, I see the significant contribution that banking services can make to people’s lives, day in, day out.

Q: What led you to choose the Chairmanship with Wallace Collection and why Wallace in particular?

Horta-Osorio: It was a great honour to be announced as the Chairman of the Board of Trustees for the Wallace Collection in December 2014.  I have long had a keen interest in the arts and I also serve as a member of the Advisory Board of the Museu Nacional de Arte Antiga in Lisbon.  My grandfather from my father’s side was an art collector himself and I was always fascinated by my visits to his home where I would admire the art pieces and hear their history and understand what made them rare and beautiful.  That is why I think I became a collector myself with a keen interest in the art of the Portuguese expansion.  The Wallace Collection is a truly extraordinary collection boasting some of the finest works by Canaletto, Velasquez, Gainsborough, in addition to a world class armoury.  So, when the Prime Minister, David Cameron, appointed me for the Chairmanship I was delighted.  Think of it as the UK’s Frick and then you will understand my enthusiasm for leading the next stage of its evolution.

Q: You’ve recently achieved a massive coup by returning Lloyds to full private ownership when the UK Government sold its last shares in the bank.  What would you say was the single most important contribution that you made to the bank’s turnaround when you started there in 2011?

Horta-Osorio: The single most important contribution was setting a clear strategy for the bank in mid-2011 – and, crucially, delivering on the strategy through a relentless focus on execution.  This required developing a great team both from inside the Bank and from outside.  The strategy we set out was to – over a three to five-year period – reshape and simplify our business to be a UK-focused, retail and commercial bank, with the goal of returning the bank to profitability and delivering the sustainable returns our shareholders expect.  Our clear focus on the UK and on helping Britain prosper was a central element of our success.

Our return to profitability was a key factor in the Government’s decision to begin the divestment of its 43% stake in Lloyds Banking Group – a process which culminated in May 2017 when the Group returned to full private ownership.

Q: Lloyds has become the biggest online and mobile bank in the UK; in 2011, Lloyds had no digital customers at all.  How did you achieve this?  Is this crucial to the bank’s success?

Horta-Osorio: Our starting point was to understand the changing nature of our customers’ behaviour and then to prioritize investment in areas that would allow us to meet customer expectations.  So, we set out to transform our digital capability, providing customers with simpler, seamless interactions across online, mobile and branches, and improving the efficiency of products and services.  We know we need to be where our customers are, which is why our multi-brand, multichannel approach allows us to give our customers a choice about how they bank with us.  From a standing start, we have become one of the largest digital banks anywhere.

Q: In May, JP Morgan announced that it would be moving hundreds of jobs to Luxembourg, Dublin and Frankfurt in preparation for Brexit.  HSBC will move 1,000 jobs to France and Barclays will bulk up their Dublin offices. There have been rumours that Lloyds will be moving jobs to Luxembourg.  Can you comment on this?

Horta-Osorio: We have no plans to move jobs to Luxembourg, or anywhere else in Europe, as a result of the UK’s decision to leave the European Union. We are a UK-focused, retail and commercial bank.  Roughly 97% of our activity is in the UK.  We have existing presences in the Netherlands and Germany, where we offer a limited range of online savings and consumer loans to retail customers.  This currently takes advantage of the ‘passporting’ rules which allow us to operate across borders. So, we are examining ways in which we can continue to serve these customers, and meet the needs of our UK customers who want to do business in Europe.  This could involve creating a subsidiary from one of our existing branches in the EU/EEA.  Clearly, when determining where to do that, a key factor will be to consider where we have an existing presence.  That’s why there’s been speculation that we will choose Berlin, given we already have several hundred people based there.  But the nature of our business and our UK focus means the direct impact on our business is less compared to our peers.

Q: A Lloyds survey recently released showed a sharp decrease in business confidence among UK firms, with recruitment a particular concern – in May, 19% of firms are expecting to expand their workforces in the coming year, as compared to 37% a month earlier.  What does Lloyds foresee for its own recruitment and have you changed any of your tactics with regard to recruiting talent?  Do you think it will get harder to recruit talent in the UK as we get closer to the start of Brexit negotiations?

Horta-Osorio: We are focused on becoming the best bank for customers, by providing a multi-brand, multichannel service across online, mobile and branches.  We have seen an acceleration in the trend towards customers completing simple transactions via mobile or online, with a corresponding reduction in branch usage. So, to the extent that our ‘tactics’ have changed, it is reflected in the skills we are looking for in our new recruits.  To build the digital services our customers are demanding, we are looking for appropriate digital skills.  We are also focused on creating apprenticeships and have made a public commitment to create 8000 new apprenticeships with permanent employment by 2020.

This material should not be construed as an offer to sell or the solicitation of an offer to buy any security in any jurisdiction. I have no positions in any of the securities mentioned above.