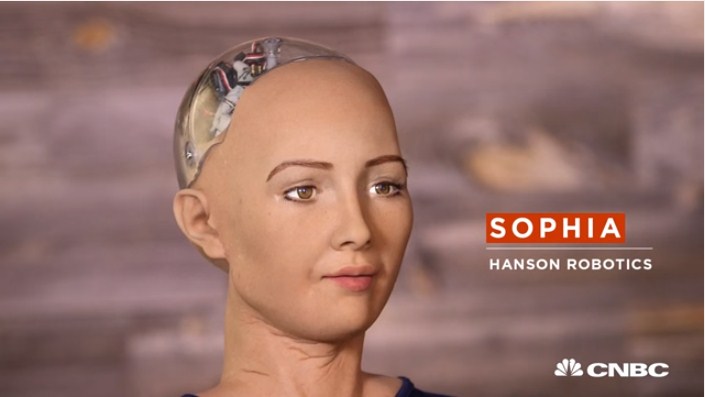 Meet Sophia, the Humanlike Robot that just Can’t Wait to Start a Business

Robotics is finally reaching the mainstream and androids – humanlike robots – are everywhere at SXSW.  Experts believe humanlike robots are the key to smoothing communication between humans and computers, and realizing a dream of compassionate robots that help invent the future of life.

Humanlike robots may seem creepy, but some roboticists are betting they are the key to unlocking a future in which humans and superintelligent computers coexist, work alongside each other and even develop relationships.

Two teams working to develop the most humanlike robots on the planet — often dubbed androids — are Hanson Robotics and Hiroshi Ishiguro Laboratories.

Dr. David Hanson leads the engineers and designers that created Sophia, the team’s most advanced android to date. Inspired by Audrey Hepburn and Hanson’s wife, Sophia will tell you that she was first activated April 19, 2015. Cameras in Sophia’s eyes and a computer algorithm allow her to “see” faces and make eye contact.

Sophia’s lifelike skin is made from patented silicon and she can emulate more than 62 facial expressions. Cameras inside her “eyes,” combined with computer algorithms, enable her to “see,” follow faces and appear to make eye contact and recognize individuals. A combination of Alphabet‘s Google Chrome voice recognition technology and other tools enable Sophia to process speech, chat and get smarter over time. Hanson is working with IBM and Intel to explore integrating some of their technologies.

Watch the video to meet Sophia a bit better.