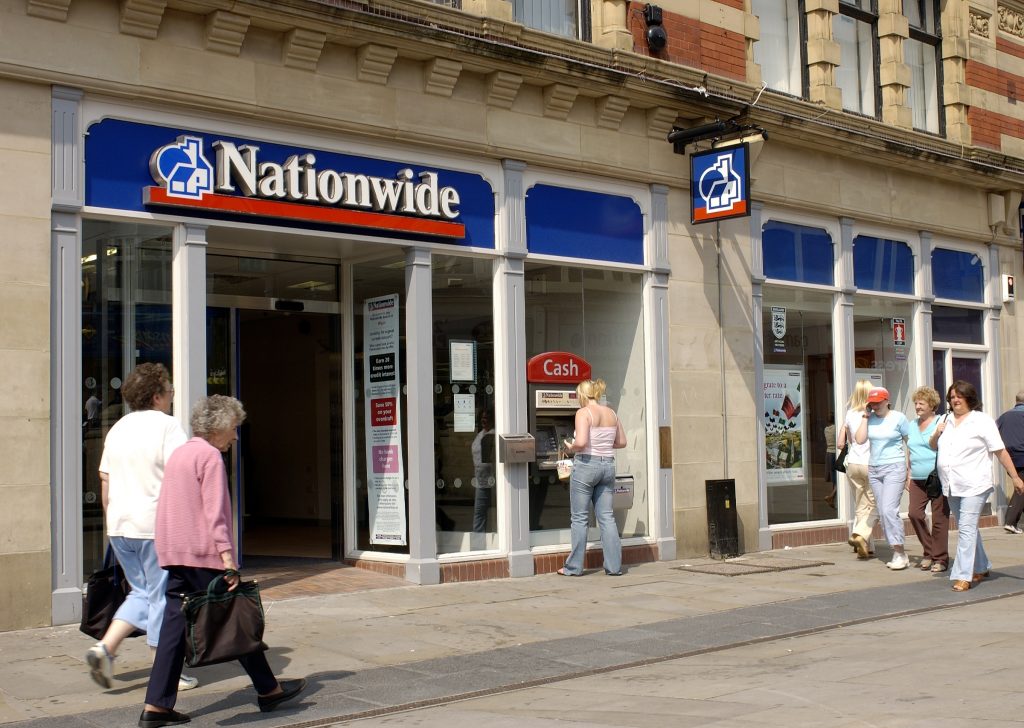 Nationwide has said it is prepared to step into communities deprived of branch banking services if a pilot scheme proves successful.

The building society’s decision to back the high street comes as the major banks – led by HSBC, Lloyds and state-owned Royal Bank of Scotland – continue to shut branch outlets in droves.

The closures, the banks claim, are in response to changing consumer usage and in particular the move to digital banking. More than 1,000 branches have died a death in the past year. Pilot scheme: Nationwide is opening a branch in Glastonbury

Nationwide, the county’s largest building society, will start its ‘pilot’ on Tuesday when it opens a new branch in Glastonbury, Somerset. In recent years, the town, famous for its music festival and quirky shops, has been stripped of all its banks with Barclays, Lloyds and NatWest exiting stage left.

Only cash machines and the Post Office provide locals and visitors with access to cash and limited banking services.

HSBC closed in November 2015, with Barclays and finally Lloyds following shortly afterwards. The closures prompted demonstrations and local MP James Heappey raising the issue in the House of Commons.

Besides Nationwide, only Metro Bank has been investing in new branches, although its 48-outlet network is primarily located in the South East. Closed: HSBC has axed its bank branch in Glastonbury in 2015

Nationwide’s move backs a longstanding campaign by The Mail on Sunday to keep banks on the high street. Instead of deserting towns en masse, this newspaper has long argued for shared or ‘community’ bank services – where all the banks get together to provide a service under one roof.

To coincide with the opening of the Glastonbury branch, Nationwide has commissioned research that indicates widespread support for the high street, with the most sought-after services being a post office, followed by a bank or building society and a pharmacy.

Tony Prestedge, an executive director of Nationwide, says the success or otherwise of the Glastonbury opening will determine whether it moves into other towns that have been left bankless by the exodus of the big four banks. He adds:

‘We want to serve as many people as possible – present and future – and the right level of commitment from communities up and down the country will ensure our branches remain relevant and sustainable.

‘If successful, Glastonbury will open the way for us to consider more branches, particularly in areas deprived of vital financial services.’

More than 1,800 accounts have already been taken out by locals ahead of the branch’s doors opening – Nationwide said it wanted at least 300 people to support its move before sanctioning the go-ahead.

The society’s move into Glastonbury has been welcomed by most locals, though some argue Nationwide’s services are incomplete. For instance, it does not provide business banking, which means local traders will still have to bank cash at the local post office. Gone: Barclays also shut down its branch in Glastonbury, shortly after HSBC

Heappey, defending a 7,500 majority as Conservative MP for Wells, says the opening is ‘massively important’ for Glastonbury. He also hopes it might change the mindset among the big banks and cause them to rein back on branch closures. He adds:

‘The key is for people to move their custom to those banks and building societies supporting the high street. If they don’t, the likes of Nationwide will not be minded to invest in new branches and keep high streets alive.’

The Labour Party has already vowed to bring in legislation preventing banks from closing branches – a commitment that is likely to form part of its Election manifesto.

He said it was high time the banks realised they ‘are a utility providing an essential public service’.

Source: This is Money