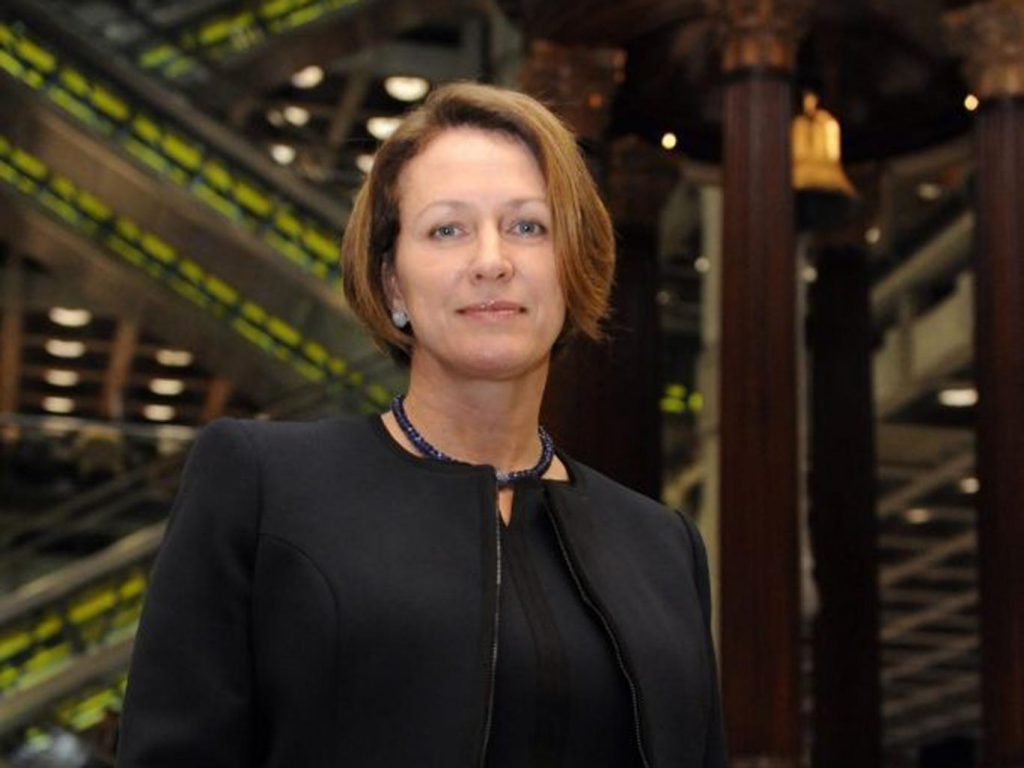 Secrets of The Lloyd’s Risk‑taker

Inga Beale rose through the ranks to become the first woman to run the insurance market.

A Bateman cartoon on the 12th floor of the Lloyd’s of London building tells you all you need to know about how the insurance market used to be. It features a gaggle of brokers leering at a glamorous woman, with a bold caption proclaiming: “A little ray of sunshine visits Lloyd’s.”

Much has changed since Lloyd’s stood as a bastion of the men-only culture that held sway in the Square Mile. These days it is run by a woman, who, in 2015, became not just the first female but the first openly bisexual person to top the list of the world’s most powerful LGBT business executives.

That’s not the only way Dame Inga Beale differs from the legions of stuffed shirts who have held her job over the centuries. When I enter her office, the 53-year-old peeks out from behind the computer screen on her stand-up desk. “I’ve been doing this since they said sitting is the new smoking. I don’t smoke so I figured I should probably stop sitting so much,” she says with a chuckle.

Beale is glamorously dressed in a bright red knee-length jacket, and a bob of highlighted brown hair swings above her broad shoulders — the legacy of her days as a back row forward in Wasps’ women’s rugby team. She flashes a smile and settles into the four-seater meeting table.

The boss of Lloyd’s has bigger plans than just ditching office chairs. She is preparing the market for life outside the European Union and is trying to convince a new generation of City workers that insurance can offer an exciting career path, regardless of their background.

“We want to appeal to a diverse workforce. We’re working a lot on unconscious bias, rolling out training across the market and helping people understand that old practices are not necessarily best,” she says in a home counties accent.

Lloyd’s traces its roots back to 1688, when merchants first gathered in a City coffee house to underwrite insurance for their ships and cargo. More than 80 syndicates, or companies, now operate on the airy underwriting floors and employ thousands of people across the world. The market sold premiums worth £30bn last year, covering risks from kidnappings in Brazil to earthquakes in California.

When my predecessor stepped down I thought I’d like that job, I’d like to shake that place up

In just three years since Beale became the first woman to lead Lloyd’s, she has overturned many long-standing traditions. She has called for more women and ethnic minorities to join and introduced a reverse mentor system, whereby she is kept up to speed on the latest technology by a twentysomething colleague. Most controversially, she has banned staff from drinking alcohol during the day.

“It’s all about modernising and bringing us up to speed with new practices,” she explains. “We didn’t have a drug or alcohol policy, so we thought we should have one. Frankly, I was surprised it got so much attention.”

When Beale started her City career in 1982, women were a rare sight at Lloyd’s. They were admitted to the underwriting floor only in 1972 — and a decade later were still barred from wearing trousers.

“Lloyd’s was one of the scariest places on earth. I never imagined for one moment that I would want to work here. It was not welcoming, not welcoming to women, it seemed like a closed club.”

Being a woman was not the only problem. As Beale progressed in her career, climbing the ranks of the insurance arms of Prudential and General Electric, she hid her sexuality. She banned her girlfriend from ringing her desk phone, and would avoid talking about her weekends and holidays, for fear that her colleagues would find out. The stress of the secrecy is clear on Beale’s face today. She clutches a glass of sparkling water and stares at a pink lipstick stain on the rim. A forlorn look replaces her confident smile.

“It’s only in hindsight that you realise how some of your behaviours were changing,” she says. “And you’ve got this secret life and it’s all very complex.”

In 2007, the situation came to a head. She was living in Switzerland, running Converium, a Swiss reinsurance company, when she was suddenly made redundant. Her assistant took her out for dinner the following Saturday to console Beale, thinking she lived alone in Zurich. The reality was quite different. Beale had, in fact, left her partner at home, having never broached the subject of her private life at work. “I’ve gone through this whole pretence,” she says. “I just thought how ridiculous and just how absurd the whole situation was.” That was the first time she opened up about her sexuality to a colleague.

Beale says she “came out” as a lesbian in an interview for a role on the group management board at Zurich Insurance in 2008. She has since married a man. Despite being an ambassador for the LGBT charity Stonewall, she says she is rarely asked about her private life. “I’ve had a few comments but most people don’t want to talk about it and some of the things I say when I speak to people I sense there is a bit of embarrassment,” she says.

A chunky diamond on her ring finger catches the sunlight streaming through the floor-length windows of her office. All of Beale’s jewellery is designed by her husband, the Swiss jeweller Philippe Pfeiffer. Now that her sexuality is out in the open, she says she realises the importance of bringing your whole self to work.

“Recently a group of workers from Bermuda came to the Lloyd’s building and I had a chat with them. Some of the faces around the table were black and I didn’t ignore that, in fact I brought it up,” she says. “I said, ‘I wonder how included you felt when you walked through the underwriting room. You probably didn’t see a black face, did you?’ I think that’s the way we have to crack it. Don’t be afraid of bringing up these differences.”

Beale is the middle child of three born to a Norwegian mother and English father in Newbury, Berkshire. Unlike many of her City peers, she went straight into the workforce after school. She started at Prudential Assurance Company but an incident in her male-dominated office prompted her to quit the City in 1989.

Posters of half-naked women had been put up around the office. When Beale objected, her colleagues removed the offensive pictures from the wall — and plastered them all over her desk. She left and went backpacking for a year to Asia and Australia. When she returned she was hired by the insurance arm of GE, which took her to Switzerland.

Her most recent role was running the Lloyd’s syndicate Canopius, before being poached to run the entire market.

“I remember sitting on the 10th floor of the Lloyd’s building when I spotted that Richard Ward was stepping down. I thought I’d like that job, I’d like to shake that place up,” she says. The process was arduous. She had interviews with 36 people before landing the top job.

Bronek Masojada, chief executive of the FTSE 250 insurer Hiscox, first noticed Beale when she was hired to revive Converium. “She did a very good job. She resurrected Converium in such a way that it actually succumbed to a hostile takeover. Someone who goes into the lions’ den and comes out with something you want to fight for is pretty amazing.”

Despite Beale’s desire for change, certain traditions remain. She maintains that Lloyd’s is still a place where someone like her can rise through the ranks, despite lacking a university education. Assessing risk, she says, cannot be learnt just from a textbook — experience is hugely important.

Now earning £1.5m a year, she recalls living in a draughty house as a young underwriter. “When the wind would blow, I would think, ‘Oh, there’s going to be a massive storm’,” which meant fretting over the potential impact on profits.

These days, Brexit appears to be the only thing that keeps her up at night. She campaigned aggressively for “remain” and still describes it as “sad” that Britain is breaking ties with the European Union.

As the leader of Lloyd’s she has had little choice but to assess the risk and come up with a plan of action. “As soon as the outcome was known we thought we needed to look at the location and the options, so we started that work immediately,” she says. Brussels came out on top. Lloyd’s is in the process of moving “tens” of people to the Belgian capital to ensure the market can function the minute Britain is formally separated from the EU. What about the impact on the economy?

“We have to go on pause and that’s the hidden impact we’re not able to measure. You’re talking four years down the line, you’ll see some sort of impact,” she says.

Beale is planning to use those four years to advance technology at Lloyd’s. “We are piloting blockchain technology now, which will hopefully mean that policyholders get their money quicker.” She acknowledges that this march of the machines will inevitably mean job losses. “There will be some,” she says. “For people who are scared about it I say, look there will always be change. New jobs will come along that we haven’t ever dreamt of. They will continue to evolve, they always have done, but the pace of evolution might be quicker.”

So, embrace the change. Beale knows plenty about that.